Both of these teams arrive in this fixture in pretty good form. Who though will run out victorious? Find out with our Hibs vs St Johnstone preview here along with the predictions and free tips we mention along the way.

Hibs to keep pressure on Rangers

Hibs have started the season in really good shape and find themselves second in the table with their unbeaten record still in tact after six games. St Johnstone can’t say the same given they’ve lost two games but they’ll be pretty happy with their start to the campaign too. St Johnstone have won back to back games (one league and one cup) heading into this match but, in spite of that, we still fancy Hibs to win. Hibs are unbeaten in six and have lost just one in 10. St Johnstone meanwhile have shown they can be beaten with two defeats in their last five.

It won’t be a classic

Hibs might have served up some high scoring encounters so far this season with a total of 12 goals scored and six conceded giving them an average of 3.0 goals per game but we don’t see Sunday’s match going over the 2.5 mark. That’s in a mammoth way because of St Johnstone. Sure, they don’t score many – just three in their six league games to date – but they don’t concede many either with just four goals against. That gives them a game average of a league low 1.2 goals per game.

Our final prediction ahead of Hibs vs St Johnstone is that Martin Boyle will, once again, be amongst the goals at some point. Not only does the Australian striker sit top of the league scoring charts with five goals but he’s netted in back to back games leading into this home tie. Hibs are playing well, they’re winning games and Boyle is in form. Despite the visitors having a decent defence if so much as a half chance falls the way of Boyle he is likely to score.

A quick overview of Hibs vs St Johnstone

Hibs start to the season has been really impressive but they’ll be keen to record a win this time out after a few draws have crept into their form. Thankfully for them, they carry a huge goal threat in Boyle, Kevin Nisbet and Kyle Magennis. Christian Doidge, who has two goals in two games this season, remains injured though.

We’ve just spoken about the attacking threat of Hibs. St Johnstone don’t have that but they do have a solid backline and two clean sheets have underpinned back to back wins.   24-year-old centre back Jamie McCart has been the leading part of that defence; he’ll need to have another good game Sunday. 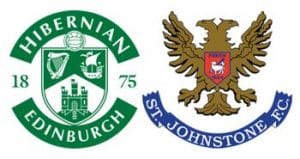