Heracles and AZ battle it out for three Eredivisie points at the Erve Asito on Sunday. Read our free predictions and find the top odds for the game below in our expert match preview.

AZ could climb into the top half of the Eredivisie table with a victory at Heracles on Sunday. Read our top three expert predictions for Saturday’s fixture below.

AZ haven’t looked themselves since the summer exodus at the club, though their solitary Eredivisie victory of the campaign did come in a 3-1 win at Heerenveen and Alkmaar could pocket more points on the road on Sunday. Heracles could be missing a chunk of first team players this weekend and AZ can take advantage of their host’s personnel issues. The Cheeseheads have won each of their last four meetings with Heracles and we’re tipping to produce the goods against them again.

AZ have yet to keep a clean sheet this season however after six attempts in all competitions and their habit of leaving the door unlocked at the back means that a shutout at Heracles is unlikely on Sunday. It’s also interesting to note that four of the last five meetings between Heracles and AZ at the Erve Asito produced goals at both ends, and we expect that pattern to continue this weekend.

Vangelis Pavlidis has made a tentative start to his AZ career having moved to Alkmaar from Willem II during the summer transfer window, though the Greek international boosted his confidence with a goal in midweek against Randers, doubling his tally for the campaign in the process. Pavlidis scored twice for his old club against Heracles last season and he is a tempting price in the anytime goalscorer market to make a similar impact on Sunday.

Heracles have major selection issues to contend with on Sunday with Marco Rente, Elias Oubella, Giacomo Quagliata, Navajo Bakboord and Kasper Lunding all out injured. To compound their crisis, Sinan Bakis is banned after being sent off in the club’s defeat to NEC last weekend. Heracles have taken just one point from nine in the Eredivisie so far, though they could struggle to improve that haul with so many players out.

Timo Letschert and Jeremy Helmer are both expected to miss out for Pascal Jansen’s side ahead of AZ’s clash with Heracles on Sunday. Alkmaar were comfortably beaten 3-0 by PSV in their last league outing, though they rebuilt some of their lost self-belief by earning a point in their first Europa Conference League group match in midweek at Danish side Randers.

Top Betting Odds and Stats for Heracles vs AZ 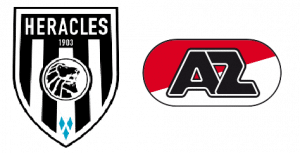 Sunday’s fixture will be played at the Erve Asito in Almelo.

How did the last meeting end between these clubs?

AZ thumped Heracles 5-0 when the sides last met on May 16.