At this early stage of the campaign it’s clear that Hearts and Livingston have very different goals for the season. Does that mean this one it a home banker though? Find out with our Hearts vs Livingston preview here along with the predictions and free tips we mention along the way.

Another defeat looms for Livingston

Hearts are unbeaten in the Premiership at the moment but three draws in their last four games means they could so with getting back to winning ways pretty soon. Thankfully, they know what that winning feeling is like having won six of their last 10 in all competitions. For Livingston winning games is much less natural with three defeats in five not a pretty picture. We fully back Hearts to get back to winning ways here.

Hearts might be performing well in terms of results and the standings but games haven’t been enthralling for the neutrals. Livingston meanwhile have been losing a lot of games without getting tonked – again, it’s not been particularly exciting viewing for anyone. What it does mean though is that there is an opportunity to find real value in an under 2.5 goals bet. Three of Hearts’ last four games have all been under that cut off with Livingston not seeing more than two goals in any of their last four. None of the last four head to heads have seen more than two goals either. Is it a banker? It doesn’t feel far off it.

Hearts to keep a clean sheet

Our final prediction is that Livingston will fail to score. They have the worst attack in the league at this time having scored just three goals in six matches and have failed to net in three of their last four games. As it happens, Hearts have one of the best defences in the division too and two clean sheets in their last three games means their backline is very much in form. Much like the under 2.5 goals bet, this is a punt that looks to carry some serious value.

The best odds for Hearts vs Livingston

Hearts vs Livingston: A preview

Hearts have kicked off the season in good shape courtesy of a solid defence and a man that can score goals. You’d expect both of those things to play a big role at the weekend. Up top Liam Boyce is the man. At the back, it’s all about the consistency of selection; Craig Gordon, Craig Halkett and John Souttar have played every minute of the league campaign to date.

Livingston have endured a less than perfect beginning to the season but do at least have one thing in common with their hosts; a steady and solid defensive record. Underpinning that are Jack Fitzwater, Max Stryjek and Ayo Obileye. A regular goal scorer wouldn’t go  amiss though; can Bruce Anderson add to his tally of three?

The final word on Hearts vs Livingston 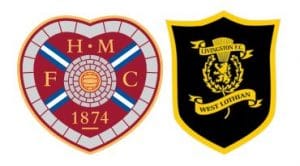