The Reds won the first round of the EFL Cup and will be looking to carry that success into League Two, where they have only ever lost. After two defeats, Harrogate will be desperate to win at home, where they took their only three points. To set the right bet for Harrogate Town vs Crawley Town, read about our predictions and betting tips for free:

The Sulphurites look favourites in this fixture, but the last time they hosted Crawley Town at their home stadium, they were beaten 3-1. The Reds started the league with two defeats, but in their last EFL Cup challenge, they showed that they have made some adjustments to their game. We, therefore, deduce that the visitors can pick up their first three points on matchday three.

When Harrogate Town and Crawley Town meet, it is synonymous with goals. In their last three head-to-head meetings, there have been three or more goals in the final scoreline. Tom Nichols scored his first official goal of the season, the Reds´ striker put the ball in the net in Crawley’s last 3-1 win over Harrogate. The attacking player is likely to add to the goal-fest we predict.

In the only four h2h in the last decade, both Crawley and Horragate have scored at least one goal in each of the meetings. We are unlikely to see a clean sheet in this match. Also, both teams have some defensive problems to solve, as they have conceded a lot of goals in recent games.

Looking For The First Points

Simon Weaver’s side failed to overcome their first away game and lost 3-0 to Crewe Alexandra. The defensive line did not perform as well as in match day one when they kept a clean sheet. The attack lacked the efficiency of their first home game and barely had a few shots on goal. In the first round of the EFL, Cup Harrogate lost to Stockpot County.

After a poor start to the season, Crawley’s only good result was a 1-0 win over Bristol Rovers in the first round of the EFL Cup. In the last round of League Two, Kevin Betsy’s side suffered their second defeat of the season against Leyton Orient, who won 1-0. With no points in the competition, Crawley sits bottom of the table.

If you want to bet on the top odds for Harrogate Town vs Crawley Town, check our selection of odds from the best betting sites:

Your Questions for Harrogate Town vs Crawley Town 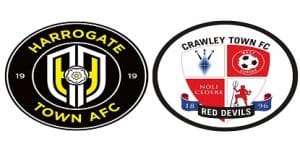 Who is the bookmakers’ favourite to win? The more probable winner is Harrogate Town at 5/4 (2.25) Odds