The Greatest Predictions And Betting Tips for Hacken vs Mjallby

With a stunning victory, the home team regained the lead in the Allsvenskan. The visitors have climbed a few places thanks to their four-match unbeaten streak. To set the right bet for Hacken vs Mjallby, read about our predictions and betting tips for free:

The visitors have now gone four consecutive matches without defeat, but we think that streak will come to a halt this matchday when MAIF takes on the tournament leaders. Hacken won the last h2h at home to Mjallby just a month ago, so this time it will probably be easier for The Wasps to get the three points.

In the last meeting between these two clubs, there were three goals in the final score, we think that this time there will be the same amount of goals or even more. In Hacken’s last five games there has been a goal fest, in each game, the result was over 2.5 goals and in total 25 goals were scored. Mjallby’s games have had more moderate results but MAIF has eight consecutive games scoring at least one goal.

We predict there will be BTTS in this matchup, this has been a fact that has happened in 87.50% of the last eight meetings. For the home team, this has also been a very common factor, as they score in every matchday, but also concede goals frequently, in fact, there have been BTTS in seven of their last eight league games. The visitors are going through a similar period, and in four of their last five games, there have also been BTTS.

Hunting For The Leader

The Wasps had another wonderful performance in the league, where they defeated Helsingborgs 5-0. With this victory and Djurgarden’s slip-up, Hacken is the new leader of the tournament. The most outstanding player of the match was Oscar Udennas, who scored a hattrick. Johan Hammar and Blair Turgott also scored for The Wasps. Goalkeeper Peter Abrahamsson kept a clean sheet.

The previous matchday was a bit frustrating for Andreas Brannstorm’s team, as after leading for most of the game with a goal from Silas Nwankwo, Elfsborg equalised when the referee was about to whistle for the final whistle. The draw halts MAIF’s consecutive winning streak but extends their unbeaten run to four matches.

Our Best Analysis Of Hacken vs Mjallby Stats and Odds

If you want to bet on the top odds for Hacken vs Mjallby, check our selection of odds from the best betting sites:

Frequent Questions About Hacken vs Mjallby 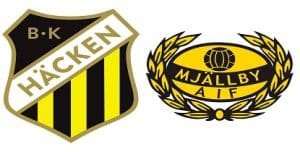 Who is the host? Hacken is the host at Bravida Arena Stadium in Gothenburg

Who is the bookmakers’ favorite to win? The more probable winner is Hacken at 1/2 (1.50) odds