Stade du Roudourou hosts Guigamp’s next Ligue 2 fixture against Bastia on November 06, 2021. Seven points and eight league positions separate the two and the hosts will look to increase the margin as they make their play for promotion slots.

Free Match Tips from Punditfeed for Guingamp vs Bastia

Here are some bias-free tips we have put together for Guingamp vs Bastia.

Stéphane Dumont will not be happy with Guingamp’s recent failings as he looks to steer his charges for a promotion push. Bastia provides them with the perfect opportunity for three points as they travel to the Stade du Roudourou on the back of a four-match winless streak. Our blessings are with the hosts, who won this meeting last season with a 5-0 scoreline.

Out of the last seven meetings between Guingamp and Bastia, both teams have scored only once. This match should be an anomaly in this trend given Les Guingampais’ defensive form in recent weeks. They have conceded eight goals in this period, which should raise hopes in the Bastia camp. The Blues have not scored in their last four outings and are due to score.

Entering Round 15, Stéphane Dumont has his work cut out from himself. His side are scoring goals with regularity but are having similar issues in containing their rivals. Their defeat to Nancy highlighted this as they fell after taking the lead in the first half. Nevertheless, they will feel confident given Frantzdy Pierrot’s form in recent weeks that has seen him score five goals and lay down an assist in four outings.

Régis Brouard seems to be out of ideas as Bastia’s indifferent performances continue. The Blues are placed 19th on the table and increasingly look likely as prime contenders for going down to French third division. However, Bastia are just two points away from safety and their third win of the campaign can see them move out of relegation slots for the time being.

Looking for the best odds for Guingamp vs Bastia? We’ve got you covered. Check out our list of odds from the popular bookies and a few important stats to help you make a good prediction.

FAQ about Guingamp vs Bastia 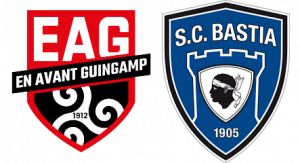