Groningen and Twente meet on Friday to contest an Eredivisie fixture in the Netherlands. Read our predictions and find the latest odds for the fixture below in our expert match preview.

Twente are targeting their fifth Eredivisie victory on the spin when they visit Enschede to take on Twente. Read our top three expert predictions for this week’s fixture below.

Twente upset the odds to win 3-2 at Heerenveen in their last outing, a result that pushed their winning streak in the Eredivisie to a superb four matches. The Tukkers have been particularly potent on the road where they have scored seven times in their last two away assignments and Twente are worth backing again when they visit a Groningen outfit that have lost four of their last five fixtures in the division.

Twente have been stepping on the gas from an attacking perspective of late and as a result, the matches they’ve been involved in have been hugely entertaining. Their last three games alone averaged a whopping 4.66 goals per 90 minutes and their open style of play should produce more fireworks when Twente travel to take on Groningen on Friday.

Twente have found the net at least twice on three occasions during their four-game winning streak and Ron Jans’ in-form charges have really been turning on the style away from Enschede. Twente smashed seven goals past their hosts in their last 180 minutes of football on the road and their counter-punching style is effective enough to back them in the over 1.5 team goals market this week.

Laros Duarte is considered doubtful once again for Groningen, while Daniël van Kaam and Mike te Wierik are still suspended and will miss out. Danny Buijs’ men were soundly beaten by Ajax last weekend as the club’s descent to the foot of the table continues. Groningen haven’t won a single game since their opening weekend triumph over newly-promoted Cambuur.

Defender Kik Pierie is rated as a doubt for Sunday’s game, as is attacker Jody Lukoki. Fellow frontman Vaclav Cerny is unlikely to feature before the end of the season. Twente produced a brilliant performance for the first 70 minutes at Heerenveen last week, though they nearly let three points slip through their fingers after a late rally by the hosts. Nevertheless, Twente are now on a four-match winning run and they should arrive in Groningen with buckets of confidence this week.

Top Betting Odds and Stats for Groningen vs Twente 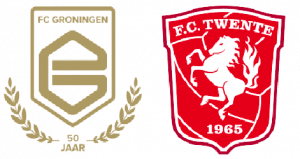 Friday’s game will be played at the Euroborg Stadion.

Which team is favourite to win on Friday?

Groningen have been priced as slight favourites to win this week by Betfred.