While the Gremio vs Vitoria rematch in Copa do Brasil probably won’t be as exciting as some others after a convincing win for the home team in the first leg, we have still done a detailed preview of the game for you, along with some free betting tips.

Our top betting predictions for Gremio vs Vitoria

If you can’t choose the right bet for Gremio vs Vitoria, check a few of our betting tips for this game:

Even though both teams have struggled so far in the season, Gremio is struggling in the top-flight, while Vitoria is struggling in Serie B. In addition to this, Gremio had a few good performances recently, including the first-leg win over Vitoria. With that in mind, we expect Gremio to win this game as well after leading at half time.

Both of these teams have averaged less than two goals per game so far in the season, so our prediction may come as a surprise to you. However, three of the last five h2h duels between Gremio and Vitoria have gone over 2.5 total goals, including the first leg that ended in a 3-0 Gremio win. So, we expect to see at least three goals in the rematch as well.

While we haven’t seen both teams scoring in the first leg and while this only happened twice in the last five head-to-head meetings between these two teams, we still expect both teams to score in this match. Gremio will most likely enter this game as if they are already through into the next round, which is pretty much the truth after their 3-0 win in the first leg. So, they will probably be a bit complacent and Vitoria should be able to take advantage of this to score at least one goal in the game. Meanwhile, Gremio will likely score as well, especially after scoring three times in the first match.

Gremio vs Vitoria prediction: The second leg just a formality?

After a convincing 3-0 win for Gremio in the first leg of the Top 16 phase of Copa do Brasil, the rematch should be just a formality. Still, let’s take a closer look at both teams ahead of their upcoming duel.

While Gremio is far from a great form and while they are still sitting near the very bottom of the Serie A standings with just one win in their first twelve games, they’ve shown some signs of progress lately. After all, the team has won three of their last six matches in all competitions, including the convincing 3-0 win in the first duel with Vitoria in the Brazilian cup. So, Gremio is already in the quarter-finals of the cup with one foot and they have reasons to feel optimistic about their upcoming matches.

With just two wins in the first fifteen rounds of Serie B, Vitoria is barely hanging out of the relegation zone thanks only to a better goal difference than other teams. So, it’s safe to say that the team isn’t having the best of season so far. And while they’ve reached the Top 16 phase of Copa do Brasil, it’s unlikely that they’ll be able to get further after losing the first leg to Gremio at home.

Top odds and useful stats for Gremio vs Vitoria

If you want to bet on the top Gremio vs Vitoria odds, check our selection of odds from various UK bookmakers: 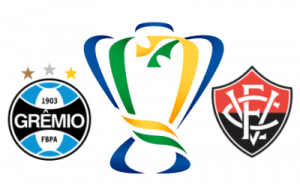