This round of the Spanish league offers a few exciting matches. One of them is Granada vs Real Sociedad, a duel between two good teams that offers many betting opportunities. So, we’ve chosen a few betting predictions that we like the most.

Our top free tips for Granada vs Real Sociedad

Choosing a prediction for Granada vs Real Sociedad can be a bit tricky since they are both good teams. With that in mind, we are offering you our top free tips to help you out:

Real Sociedad are the favourites in this game, for a good reason. The away team are simply in better form in the league, while Granada also has a game to play in Europa League only three days before this match. They are also struggling with injuries, which will make them even more vulnerable at the moment. Our prediction is that Real Sociedad will take advantage of the situation and snatch an important away win.

Although these two teams have played some high-scoring matches in the past since both teams scored in three of their last five games, we don’t expect a plethora of goals now. First of all, in those two instances when one team didn’t score, both times it was Granada who failed to net a goal. And since they are not in the best form at the moment, we don’t expect them to find a way past the great Sociedad defence which concedes less than a goal per match in La Liga this season. Furthermore, Real Sociedad only conceded two goals in their previous five games.

As we already said, we expect Sociedad to win. To achieve this, they have to score some goals. Although Mike Oyarzabal is not the top scorer for Sociedad this season, he is right behind Alexander Isak with just two goals fewer. Additionally, Oyarzabal is quite efficient against Granada since he scored four goals in six matches against them. Our tip is that he will score once again.

Granada and Real Sociedad are both teams that played Europe this season, with Granada still in contention for the Europa League title after making it to the top 16. So, it should be an interesting match between these two teams.

Granada are not in the best form in La Liga. They have only won once in the last five games, losing three matches in the process. Playing in the Europa League has taken its toll on their domestic results, especially since they also have to deal with a great number of injuries. Among the most notable players missing are Luis Javier Suarez, Darwin Machis, Carlos Neva, and Luis Milla. With the match against Real Sociedad scheduled three days after their European duel against Molde, we expect Granada to put the emphasis on Europe.

Real Sociedad finished their European journey much earlier than Granada and they have been fantastic this season in La Liga, even sitting at the top at one point. And while they’ve dropped to 5th in the meantime, they are in great form at the moment with four wins in their last five matches, only dropping points in a draw with Real Madrid. Real Sociedad is also dealing with many injuries, although only a couple of them are first-team players.

Betting odds for Granada vs Real Sociedad depend on the bookies, so take a closer look at the best odds we have prepared for you, along with some important preview stats:

FAQ about Granada vs Real Sociedad 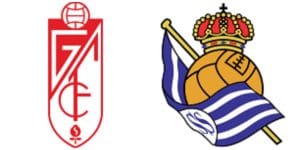