Estudiantes lost two points in La Plata Derby, a goal of Eric Ramirez at the last minute settled the tie in favour of Gimnasia. Godoy Cruz is looking for a win they could not find in their previous match when they visit Talleres’ home.

The right tips and picks for Godoy Cruz vs Estudiantes

If you want to place the right bet for Godoy Cruz vs Estudiantes, check our predictions and betting tips for free:

Estudiantes appear as they are the favourite for most of the bookmakers, but only for a little difference. Despite Godoy being in the mid-table, they always make things tough for any of their rivals. However, we think the leader of group B will have total control of the game.

On the one hand, Estudiantes count on two of the best shooters in the Argentine league, Leandro Diaz and Mauro Boselli. On the other hand, Godoy is one of the teams which has conceded more goals during the season. So, La Pincha may score two or three and El Tomba can put the ball into the net at least once.

Both teams used to attack the rival area constantly, because of this, they also leave free zones, where opponents can take advantage. So, fans from both sides will celebrate their team goals in the next match.

Godoy Cruz failed 2-1 when faced Talleres on Tuesday in the seventh round of La Liga Profesional. They also missed the chance to move closer to the quarter-final qualification zone. For the next matchup, Guillermo Ortiz is not available due to the referee showed him the second yellow card when the previous game was almost finished.

The boss, Zielinski wishes to play the best team in Mendoza, but the physician team has not confirmed the Uruguayan Agustín Rogel to be ready to play. Estudiantes will have ten matches during the next thirty-one days, so they can not afford to risk players. El Pincha has gotten fourteen points, those have been enough to be the leader of group B, where they want to keep staying.

If you wish to bet on the top odds for Godoy Cruz vs Estudiantes, check our selection of odds from the best betting sites: 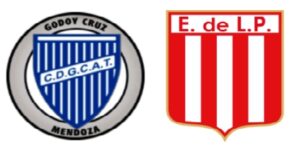 Who is the host? Godoy Cruz is the host at Malvinas Argentinas Stadium in Mendoza

Who is the bookmakers’ favourite to win? Godoy Cruz