Go Ahead Eagles and Heracles face off at De Adelaarshorst on Saturday in the Dutch Eredivisie. Read our predictions and find the latest odds for the fixture below in our detailed match preview.

Heracles continue their search for a first away win of the campaign when they travel to take on Go Ahead Eagles. Read our top three expert predictions for this weekend’s fixture below.

Go Ahead Eagles have been leaning heavily on their home form to collect points this term, indeed, they have claimed six of their seven points so far at De Adelaarshorst. Heracles meanwhile, have failed to win any of their last six league games on the road in a run that stretches all the way back to April last season and their habit of dropping points on their travels means they are worth opposing on Saturday, despite their tag as favourites.

Both Heracles and Go Ahead Eagles have had similar problems in defence this term. Go Ahead have kept just two clean sheets in eight matches since the summer, while Heracles have recorded just one shutout in seven attempts during the same period. Neither side can be relied upon to keep the other out this weekend and that in turn makes the BTTS market an interesting prospect.

Go Ahead Eagles are averaging just 1.0 goal per 90 minutes at home this term – a record that matches up well to Heracles 1.0 goal per away game in the same timeframe. The hosts are conceding less than a goal per fixture at the opposite end however and their defensive nous could be taken advantage of with a stake on Go Ahead at +1 in the match handicap market on Saturday. That bet would have landed in three of their four home assignments this season and we recommend sticking with the same approach here.

Gerrit Nauber, Martijn Berden, Sam Crowther, Frank Ross and Jacob Mulenga are all unavailable this weekend, so expect to see a similar XI to the one that drew 1-1 at RKC before the international break. Go Ahead Eagles have looked threatening at home this term, where they have already beaten Sparta Rotterdam and PEC Zwolle.

Rohat Agca, Mohamed Amissi and Kasper Lunding are all expected to be absent this weekend. Heracles won three of their four Eredivisie fixtures before the international hiatus, though all three victories were secured on home turf. Away from Erve Asito, their performances have been noticeably worse however, and they haven’t won on the road since March.

Top Betting Odds and Stats for Go Ahead Eagles vs Heracles

Go Ahead Eagles vs Heracles Coverage and Frequently Asked Questions 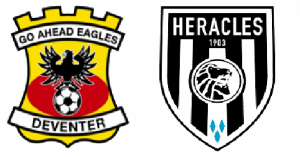 Which bookmaker has the best odds for Saturday’s game?

We recommend using the odds at 888sport for Saturday’s fixture.

Go Ahead Eagles and Heracles haven’t met since April 2017. Heracles won 4-1 on that occasion.