The beginning of this season for both Gimnasia de la Plata and Talleres de Córdoba are two different stories with the same ending. The host knew the victory just last Matchday, while the visitors won in their first game since then they have not done it again.

If you are not sure to place the right bet for Gimnasia La Plata vs Talleres de Cordoba, check our top betting tips for free:

The host will defend their home and show that they are better when the battle is settled at Juan Carmelo Zerillo Stadium. Only if Talleres de Cordoba’s forwards have a good performance in the next match, we feel they will not be able to beat Gimnasia.

Although Talleres is one of the teams that has scored fewer goals in La Liga Profesional, they will be in front of Gimnasia La Plata. Gimnasia is the team that has conceded more goals in this new season, so we expect a high score in this game.

A win will move any team from their current mediocre position, so they both will try to bury the ball into the rival’s net. Both teams use to concede goals in every game.

Gimnasia La Plata vs Talleres de Cordoba preview: a race to escape from the bottom of the table

Gimnasia La Plata is stronger when they play at Juan Carmelo Zerillo Stadium, four times, they have been the host with no defeat. However, they must improve their shot accuracy to take advantage of their goal opportunities. In their last duel against Estudiantes, they attempted seventeen times, equalizing the game just with the last shoot in the last minute.

La T achieved a great 2-1 victory in their last Liga Profesional game where they beat Godoy Cruz. The key in that game was the positive ball possession and the goal opportunities they had. It was the first time Talleres de Córdoba scored more than once in the same game in this new season. By the way, It was just the second game they were able to put the ball back into the neck of their rivals.

If you wish to bet on the top odds for Gimnasia La Plata vs Talleres de Cordoba, check our selection of odds from the best betting sites: 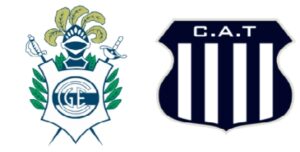 Who is the host? Gimnasia La Plata is the host at Juan Carmelo Zerillo Stadium in La Plata

Who is the bookmakers’ favorite to win? Gimnasia La Plata