In this article, we will focus on the upcoming Gillingham vs Wigan match this weekend. You can check out the latest match preview, free tips, and odds for the event below.

These are our top betting tip recommendations for the upcoming Gillingham vs Wigan match this weekend.

We used odds from our recommended bookmaker – Betfred, and they were correct at the time of writing. Check your bet slip before confirming because all odds are subject to change.

Two of the last three times these teams faced each other, the games ended with clean sheets. Also, there have been quite a few games this season without a BTTS outcome.

Both teams have an average of 2.4 total goals per game for the season. Also, 70% of Gillingham’s ten games this season and five of the nine games for Wigan ended with under 2.5 total goals scored, as did three of the last four head-to-head games between the teams.

Our Final Prediction for Gillingham vs Wigan

Wigan hasn’t had the best one on one score against Gillingham, but this season their form is almost perfect. They were at the top of the table for some time, but now they’ve dropped to the second position. Two of their players are at risk of getting suspended because they have a total of four yellow cards each. Also, Gwion Edwards isn’t going to make it to the match this weekend because of thigh problems he has had since November of last year.

Although the Gills have a positive head-to-head history against Wigan, we don’t think they will be lucky enough to win on Saturday because Wigan has had an amazing season, so far. They don’t have any injured or suspended players, so far, so they will be playing at 100% against one of the table leaders.

In the tables below, you can check out the latest bookmaker odds and team statistics for the Saturday match between Gillingham and Wigan.

Common Questions & Answers About the Match 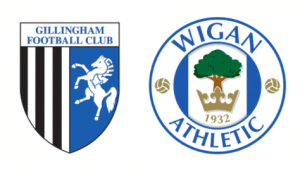