Georgia will host a friendly match against Uzbekistan on Monday, 15 November. Uzbekistan enters the game on the back of a defeat while the hosts look for the third consecutive win in this match.

Free Match Tips from Punditfeed for Georgia vs Uzbekistan

Here are some bias-free tips we have put together for Georgia vs Uzbekistan.

Match Result: Georgia to win @ “Odds yet to be announced”

Georgia recovered from a streak of five consecutive defeats and got the momentum back with two wins in a row before this match. Uzbekistan also has had almost the same results recently, having two wins and three defeats in the last five outings. The teams have faced each other once in the past in a friendly match where the game ended as a draw with 2-2. But our prediction for the match would be Georgia to win as they will be confident this time over their two consecutive victories and extra home advantage.

Uzbekistan and Georgia have been quite mediocre in their attacking line and have hit the target seven and five times respectively in their last five games. adding more to this, Georgia Bulldogs have scored only one goal in the last three away games. Given all this, we would expect a different outcome from their last meeting and the end of the match with a low-scoring total.

Georgia has scored in three of the last four games while Uzbekistan has scored only two times in the last four games. White Wolves scored six goals where five of them came in the one game. Adding more, Georgia came into this game with a clean sheet of the last game while their next rivals conceded three goals in their last match and also were unable to score. So we expect that the match will go with a BTTS outcome.

Georgia were held to 0-0 in the first half of their last game but Kvaratskhelia’s brace in the second half helped the team to take the lead of 2-0 at the end of the match. The team completed the First Round of WC Qualifiers with a win but they have been eliminated from the next round. They have succeeded in the home ground after three consecutive defeats of home games.

White Wolves Turanians got hammered by Jordan in the last match where they lost as a 3-0 result at the end. They have claimed one victory out of the last four matches in their home stadium and lost all other three away games.

Looking for the best odds for Georgia vs Uzbekistan? We’ve got you covered. Check out our list of odds from the popular bookies and a few important stats to help you make a good prediction.

FAQ about Georgia vs Uzbekistan 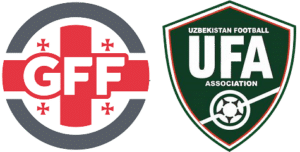