After going four matches unbeaten in the J1 League, Gamba Osaka finds themselves in the rut again. In Oita Trinita, they have a foe that is going through a similar patch of form and is also staring down the relegation barrel.

Here are some bias-free tips we have put together for Gamba Osaka vs Oita Trinita.

The Nerazzurri have lost their last two matches at the Panasonic Stadium Suita and an in need of favourable news. Oita Trinita’s trip to Osaka brings that positivity. The Trinita are winless in their last ten away trips and have lost four on the trot. Gamba Osaka will fancy their chances and should be able to take home the victory despite their personal woeful form.

Gamba Osaka finished last season in second place but are languishing in relegation slots. This has not happened due to their defensive performances, as they have only conceded 17 goals in 18 outings. It can be attributed to their scoring prowess which has seen them hit the back of the net only 9 times. With Oita Trinita scoring 13 in 21 outings, both sides have shown no inkling in hinting towards high scoring results on their own accord.

Oita Trinita’s 13 goals at a rate of 0.62 goals per match shows that there are far too many occasions where they have been shut out. The same goes for Gamba Osaka who are averaging 0.5 goals per match. Given their respective struggles in front of the goal, it looks likely that one of Gamba Osaka or Oita Trinita will fire a blank in their midweek meeting.

After showing signs of halting their losing run, Gamba Osaka finds themselves back in tumultuous times. They have followed their win over Aivspa Fukuoka with successive defeats to Kashima Antlers and Vissel Kobe. With the first half of the campaign in the rearview mirror, Tsuneyasu Miyamoto needs to address their failings or it will be curtains on their Japanese top-flight football stay. Their attacking forays have come out as blunt and need to address this if they are to put the relegation battle behind them.

Gamba Osaka are getting more deadlines for their placement in the relegation slots than their rivals. This puts less pressure on the likes of Oita Trinita, who have the opportunity to work their way out of this misery without the public hounding on their every mistake. However, Tomohiro Katanosaka will know it would not be easy to weasel out of this situation as he leads his side to the Panasonic Stadium Suita despite being on a ten-match winless run on the road.

Looking for the best odds for Gamba Osaka vs Oita Trinita? We’ve got you covered. Check out our list of odds from the popular bookies and a few important stats to help you make a good prediction. 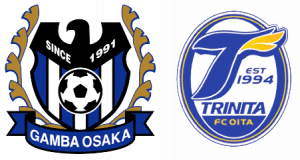 With both sides struggling, it is difficult to pick one player who has really caught the eye. Gamba Osaka defender, Keisuke Kurokawa, is the exception, forging a place for himself in his breakout season.