Feyenoord and Heerenveen lock horns in the Eredivisie on Wednesday evening in Rotterdam. Read our predictions and find the latest odds for the fixture below in our expert match preview.

Can Feyenoord follow up their superb victory at PSV with another win against Heerenveen? Read our top three expert predictions for this week’s fixture below.

Feyenoord had gone three games without a win in all competitions before their away test at PSV on Sunday, though the Rotterdam giants bounced back in superb fashion with a rousing 4-0 triumph at the Phillips Stadion against their title-chasing hosts. With their tails up, Arne Slot’s charges should be in confident mood against Heerenveen on Wednesday and we’re tipping another victory to follow.

Heerenveen could never be described as prolific, though De Superfriezen are consistent in front of goal at least and they have found the net in 100% of their first five Eredivisie fixtures of the new campaign. Their knack for impacting the scoresheet could allow them to pocket a goal in Rotterdam this week, though Feyenoord – who are the division’s third-highest scorers – should be difficult to resist at the opposite end. With those factors aligned, the BTTS market is worth pursuing.

Feyenoord striker Bryan Linssen notched his fourth goal in as many Eredivisie appearances this season with an effort against PSV on Sunday and the 30-year-old looks a solid bet to add to his tally on Wednesday. Linssen hit a superb hattrick in last season’s corresponding fixture between Feyenoord and Heerenveen and we’re tipping the Dutchman to make his mark again.

Midfielder Mark Diemers is Feyenoord’s only injury worry ahead of Wednesday’s game, though Feyenoord certainly didn’t miss the 27-year-old against PSV at the weekend. Feyenoord’s exceptional 4-0 victory in Eindhoven was their third win in four Eredivisie matches since the summer and they could climb up to second spot with the right set of results this week.

Pawel Bochniewicz, Rami Kaib and Rodney Kongolo will miss Wednesday’s game through injury. Johnny Jansen’s men eked out a 1-0 win at home to Fortuna Sittard last time out and key attacker Henk Veerman was their match-winner again. The 30-year-old is in fine form, though Heerenveen’s over-reliance on him for goals could become a problem.

Top Betting Odds and Stats for Feyenoord vs Heerenveen 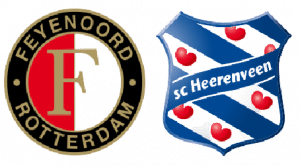 Betfred have made Feyenoord their clear favourites to win on Wednesday.

Neither team is expected to give champions Ajax a run for their money in the title race this term.

We recommend using Betfred for this game. They offer the best prices for Feyenoord vs Heerenveen.