Accurate Predictions and Picks for Fatih Karagümrük vs Alanyaspor

The two protagonists of this exciting duel had an acceptable season. In this edition, they will try to improve on last season’s performance to win a place in European competitions. To set the right bet for Fatih Karagümrük vs Alanyaspor, read about our predictions and betting tips for free:

We think the away team will win, although both teams have a similar level, Alanyaspor was superior in the two meetings they had in the last tournament. In pre-season both teams played only one friendly match, Alanyaspor won easily, while Fatih Karagumruk lost.

In the last five h2h, there were never more than two goals in the final score. Still, we think that the next match will be different, as both teams had only one preparation match, and there are still tactical moves to improve and new players to adapt. So it would not be unusual to see over 2.5 goals in this matchup.

As it is the first matchday, we think that both teams will score at least once as at the beginning of each tournament teams usually have some tactical mistakes. Moreover, in six of Karagumruk’s last eight matchups, there have been BTTS.

Karagumkuk had a good season but still finished in the top half of the standings. Fifteen wins, nine draws and thirteen defeats were Karagumruk’s record in the 2020-2021 period.

Midfielder Emre Akbaba was Karahumruk’s best player in the previous tournament, and he is expected to continue his good form by scoring many goals and assisting his teammates.

Last season, the team coached by Francesco Fiarolli was one place below the places that give a place in European competitions. This time, the objective will be the same and if possible to improve on the previous season’s pre-tournament performance.

This was one of the few teams that decided to play a few friendly matches as part of their preparation. In their only friendly match, Alanyaspor lost 2-1 to Kayserispor.

A Breaf Review of Fatih Karagümrük vs Alanyaspor Stats and Odds

If you want to bet on the top odds for Fatih Karagümrük vs Alanyaspor, check our selection of odds from the best betting sites:

FAQs for Fatih Karagümrük vs Alanyaspor 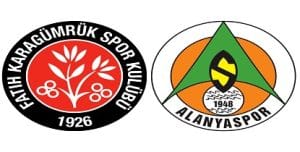 Who is the bookmakers’ favourite to win? The more probable winner is Alanyaspor at 7/5 (2.40) Odds