Zwolle and PSV lock horns on the final day of the Eredivisie campaign at the MAC³PARK Stadion. Can Zwolle sign off with a shock win before their relegation? Read our free predictions and find the latest odds for the fixture below in our detailed match preview.

PSV put their 12-match unbeaten run on the line when they visit already-relegated Zwolle on the last day of the season. Read our top three predictions for this weekend’s fixture below.

Zwolle’s relegation was confirmed on Wednesday when they were beaten by fellow bottom feeders Sparta Rotterdam and with the wind taken out of their sails, we expect the minnows to bow out listlessly on Sunday. PSV are unbeaten in 12 Eredivisie assignments and they will want to give manager Roger Schmidt the perfect send-off before he joins Benfica. With the gap in quality between the sides considerable, back the away side to prevail.

PSV have been making mincemeat of Zwolle for several seasons now and the Boeren rattled the net an eye-watering 22 times across the last six meetings between the clubs. PSV covered the -1.0 handicap on each occasion and they should be able to enjoy themselves again against a PEC outfit that have been flattened by their recent relegation.

Israeli striker Eran Zahavi scored his 11th goal of the Eredivisie season on Wednesday against NEC and the 34-year-old can close out a productive campaign with another strike against PEC on Sunday. Zahavi has netted three times in his last four appearances in the league and he has the nous up front to make his mark again this weekend.

Samir Lagsir is out until next season with a knee injury while Mustafa Saymak, Dean Huiberts and Sam Kersten are all considered doubtful for Zwolle this week. Max de Waal and Oussama Darfalou are also likely to miss out. Zwolle rallied hard late on this season, though their efforts weren’t enough to spark a miraculous survival bid. Sparta sealed their fate on Wednesday with a 2-0 win in Rotterdam.

PSV have several of injury worries to deal with this week. Olivier Boscagli, Armando Obispo and Ryan Thomas are all out for the rest of the season, while Yorbe Vertessen, Carlos Vinícius, Phillipp Mwene, Davy Propper, Andre Ramalho Silva and Shurandy Sambo are all considered doubtful. PSV were beaten to the Eredivisie title by Ajax this season, though they can be proud of their long chase of the champions in 2021/22.

Top Betting Odds and Stats for Zwolle vs PSV 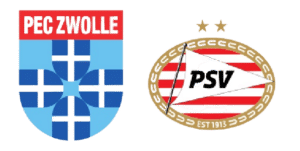 Zwolle vs PSV will be played at the MAC³PARK Stadion on Sunday.

Who is Zwolle’s top scorer this season?

With six goals, Daishawn Redan is Zwolle’s stop scorer in the Eredivisie this season.