Wycombe and Rotherham meet at Adams Park in England’s League One on Saturday. League leaders Rotherham travel to take on playoff contenders Wycombe. Read our free predictions and find the latest odds for the fixture below in our detailed match preview.

Two of the division’s top five combatants face off on Saturday when Wycombe host Rotherham. Read our top three predictions for this weekend’s fixture below.

Fifth-placed Wycombe will kick off Saturday’s clash with table-topping Rotherham as underdogs, though Wanderers could be worth backing to upset the odds in the double chance market. The Millers are in the midst of a mini wobble and having dropped points in three of their last five matches, they could find the going tough again in a tricky assignment at Adams Park. Wycombe have won each of their last two games, netting six times in the process and they should wield enough confidence to give the leaders a real run for their money.

When Wycombe and Rotherham last went toe-to-toe in October, the sides looked well-matched in a cagey contest that eventually finished 0-0. The chances of another chess-like battle developing in Saturday’s rematch feel high and when you consider that under 2.5 goals has landed in seven of the Millers’ last eight League One tussles, the same market becomes an even more appealing option.

Rotherham have been taking time to get up to speed in many of their recent matches, especially on the road, where each of their last four fixtures started slowly. Indeed, 100% of those skirmishes were level at half time and Saturday’s meeting at Wycombe could follow a similar pattern. The teams were locked at 0-0 after 45 minutes when they last met in October and a stake on a draw in the half time market could be worth pursuing again on Saturday.

Nick Freeman is currently sidelined for Wycombe, while fellow midfielder Curtis Thompson is also rated as doubtful. Wanderers are firmly in the mix for a playoff place this term and back-to-back victories over Cambridge (3-0) and Crewe (3-1) have helped to strengthen their position.

Rarmani Edmonds-Green, Mickel Miller and Will Grigg are all in the treatment room for Rotherham this week. The Millers slipped to a surprise 2-1 defeat at home to MK Dons last week, though they really should have taken more from the game. Rotherham had a one-man advantage for over an hour of the contest and they mustered 17 shots to their visitor’s four over the course of 90 minutes.

Top Betting Odds and Stats for Wycombe vs Rotherham 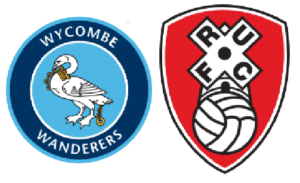 Wycombe and Rotherham drew 0-0 when they last met on October 19th.

With a four point advantage over Wigan at the summit, Rotherham are League One’s current leaders