Wigan welcome Cambridge to the DW Stadium in League One on Saturday. Table-topping Wigan are aiming to stretch their lead at the division’s summit. Read our free predictions and find the latest odds for the fixture below in our detailed match preview.

Wigan have won four of their last five home assignments ahead of their clash with Cambridge in League One. Read our top three predictions for this weekend’s fixture below.

Wigan to Win and Both Teams to Score

Wigan are firmly in the driving seat in the League One title race, though the Latics will have to work hard to beat in form Cambridge on Saturday. United have won three of their last four matches and they should be confident enough to score at the DW Stadium this weekend. The hosts have won four of their last five home assignments however, and backing Wigan to triumph and both teams to score is a standout choice at a bumper price as a result.

Cambridge went toe-to-toe with Wigan in a pulsating 2-2 draw when the teams last met in November and another high-scoring tussle is on the cards when the clubs reacquaint themselves on Saturday. The last three fixtures at the DW Stadium averaged a healthy 3.33 goals per 90 minutes and the hosts in particular, wield enough firepower to maintain that healthy average this weekend. With that considered, we recommend a stake on over 2.5 goals again.

With two goals in his last three starts and 21 for the season in League One overall, Will Keane is enjoying the most productive campaign of his career by some distance in 2021/22. The 29-year-old scored one of Wigan’s goals when they drew 2-2 at Cambridge before Christmas and the Republic of Ireland international can make his mark in the return fixture on Saturday.

James McClean, Curtis Tilt, Tom Bayliss, Scott Smith, Thelo Aasgaard and Charlie Wyke are all out injured for Wigan, while Luke Robinson is still considered a doubt. The Latics dropped points unexpectedly on Tuesday evening when they were held to a 0-0 draw at plucky Burton. Wigan still lead the way by four points in League One however, and they still have a game in hand over second-placed MK Dons.

Greg Taylor, Kai McKenize-Lyle and Jensen Weir are all in the treatment room for Cambridge, though Liam O’Neil will hope to return to the fold following a short layoff. Jack Iredale and Shilow Tracey were both fit enough to play a part in the U’s 2-1 win over Morecambe last week and both should be involved again at Wigan on Saturday.

Top Betting Odds and Stats for Wigan vs Cambridge

You can view our rundown of the top stats for Saturday’s game below alongside a tool to help you pick the best odds. 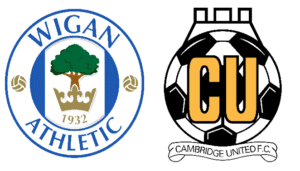 Who is Wigan’s manager?