This is a Dutch Eredivisie match which will feature two teams who are waiting for their first league win of the season. Volendam are up against NEC at the Kras Stadion in the early kick-off on Sunday.

Volendam produced a spirited comeback to pick up a 2-2 draw against Groningen in the opening game of the campaign. Despite playing at home, NEC lost 1-0 to Twente in the first match of the season.

Volendam were able to come up with a strong performance in the opening game of the campaign against Groningen. Meanwhile, NEC had a very difficult opening match that ended in a defeat and without a goal. The contrasting start to the season is likely to have its effect in the second match. Even though NEC manager Rogier Meijer has a 100% wind record against Volendam and Wim Jonk, this splendid run might be coming to an end.

The recent encounter between the two clubs in the 2020-21 campaign might have witnessed a 1-0 win for NEC, but the previous five encounters have all witnessed more than 2.5 goals. In fact, this fixture has had an aggregate score of 23 goals (16-7 in favour of NEC) over the last six meetings.

Volendam were unable to score in the last game against NEC and in the campaign in which they were relegated to the second tier. However, this Volendam outfit are much better than the team which was relegated.

Volendam last picked up a win over NEC back in 2019 and this is also the only victory for the team in the last six outings. Yet, Volendam approach the upcoming Dutch Eredivisie game as the confident of the two after having produced a strong performance in the opening game. The major problem for coach Wim Jonk will be the large absentee list with Oskar Buur, Josh Flint, Walid Ould-Chikh, Achraf Douiri, Calvin Twigt, and Dean James missing due to injuries.

NEC were able to pick up a big victory over Volendam in recent outings, but the home defeat against Twente would have provided a jolt to the confidence levels. The defeats in the friendly games against FC Cologne already had seen NEC approach the new season in a fragile manner. Jordy Bruijn, Magnus Mattsson, and Mathias De Wolf are missing due to injuries.

Detailed Stats and Numbers for Volendam vs NEC

FAQs on Volendam vs NEC game 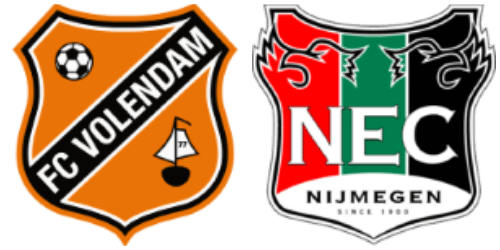 Where is the match going to take place? Kras Stadion

Who is the favourite team to win the game? Volendam