Vitesse and Cambuur meet in Arnhem in the Eredivisie on Sunday. Can the hosts get back to winning ways at their struggling opponent’s expense? Read our free predictions and find the latest odds for the fixture below in our detailed match preview.

Cambuur have lost four games on the bounce ahead of their trip to play Vitesse in the Eredivisie on Sunday. Read our top three predictions for this week’s fixture below.

With their place in the top six coming under threat, Vitesse need to shake themselves following a run of just one win in eight games in the Eredivisie, though a clash with a Cambuur side in free fall could be an opportunity to do just that. Vitesse thumped the newly-promoted outfit 6-1 in December and they could inflict Cambuur’s fifth straight league defeat with a repeat performance in Sunday’s rematch.

Vitesse’s six-goal haul against Cambuur before Christmas remains their biggest of the campaign so far and Thomas Letsch’s charges will be aiming to fill their boots against the same opponents this weekend. Cambuur have shipped at least two goals in each of their last three runouts in the Dutch top flight and a stake on Vitesse to net over 1.5 times against that leaky defence looks a solid option at the prices on offer.

Dangerous Belgian attacker Luis Openda helped himself to two of Vitesse’s six goals when they thumped Cambuur last year and the 22-year-old is the player to watch out for again in the anytime goalscorer market on Sunday. Openda found the net in Vitesse’s last home assignment against RKC and the former Club Brugge youngster can make his mark at GelreDome again this weekend.

Vitesse have concerns over the availability of Markus Schubert, Alois Dominik Oroz, Eli Dasa and Nikolai Baden Frederiksen this weekend. Vites are without a win in any competition since the end of February and they were dumped out of the Europa Conference League by Roma. Despite their poor run, they have held on to sixth place in the Eredivisie.

Goalkeeper Sonny Stevens, defender Maxim Gullit and attacker Tom Boere could all be missing for Cambuur this weekend in what would be a major triple blow to their chances. Cambuur have drifted into the bottom half of the Eredivisie after four straight defeats, though a return to winning ways on Sunday could catapult them back up the standings.

Top Betting Odds and Stats for Vitesse vs Cambuur

You can find our rundown of the best stats for Sunday’s game below alongside a tool to help you select the best odds. 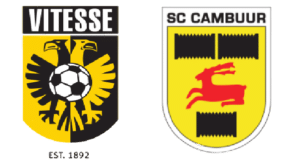