The Valencia vs Elche duel could be a very interesting one, so check our preview of this game to learn more about it, along with our free betting tips.

If you are struggling to find the right bet for the Valencia vs Elche duel, check our top betting tips for this match:

The Bats are without a loss in the last five games, winning two of those games in the process. They are also eighth in the standings, while Elche is struggling to stay out of the relegation zone and they are currently only three points away from it.

With that in mind, our prediction is for Valencia to win this match. After all, they are the better team on paper and they play at home, in addition to winning three of the last four h2h duels against Elche.

Three of the previous four head-to-head duels between Valencia and Elche have gone over 2.5 total goals, so we can see that happening in their upcoming game as well.

Both teams have scored in two of the last four meetings between Valencia and Elche and we expect to see the same when they meet again on Saturday.

In addition to this, both teams have scored in a whopping 69% of all Valencia matches in the league until now, while the same thing happened in 56% of all Elche games in La Liga this season.

The highest odds and important stats for Valencia vs Elche

If you want to a bet on the best Valencia vs Elche odds, check our selection of odds from the top UK betting sites:

Valencia vs Elche preview: An easy job for Valencia?

The Bats have been hot and cold this season and it’s been hard to predict their matches due to this inconsistency. That being said, Valencia is in good form lately and they have two wins and three draws in the last five matches. Overall, the team is seventh in La Liga standings with twenty two points from sixteen games. Gabriel Paulista, Correia, Jimenez, and Alderete are out with injuries, while Gaya has to serve a suspension.

With fifteen points from sixteen games, Elche is currently very close to the relegation zone, only three points away from the first team in it. Also, the team has one win, two draws, and three losses in the last six games in La Liga, so they are clearly far away from their best form. On the bright side, only Bigas and Mojica are injured at the moment. 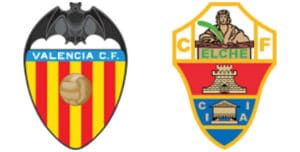