In this article, we will check out the latest Utrecht vs Go Ahead Eagles match predictions and betting tips for the upcoming fixture this weekend.

Top Utrecht vs Go Ahead Eagles Predictions and Match Tips

Below, you can check out the latest betting tips and odds for the upcoming Eredivisie match between Utrecht and Go Ahead Eagles this weekend.

All odds are from the recommended bookmaker Ladbrokes and are also subject to change. Double-check your bet slip before confirming anything.

By all accounts, Utrecht and Go Ahead Eagles’ recent form is quite similar, and based on only that we can’t determine a probable winner. We looked at the most recent games involving both teams and saw that four of the last five matches that they played against each other ended with a win for Utrecht. Also, Utrecht has done almost perfect at home with nine wins out of the last ten games played there and not even one recorded loss in that period.

Lately, Go Ahead Eagles have had more than a few low-scoring outcomes, including three of the last five matches they played in League One. Also, looking at the head-to-head history between them and Utrecht, we can see that most of the recent games played ended with under 2.5 total goals (three of the last four matches).

Fixture Preview & Injury Reports for Utrecht vs Go Ahead Eagles

Like most Eredivisie teams, Utrecht and Go Ahead Eagles have several players sidelined because of various injuries. For example, three players of Utrecht have knee injuries and won’t be able to play this weekend and defender Sylian Mokono is also out with a knock injury.

On the other hand, Go Ahead Eagles have a total of five injured players and each of them is out with a different injury type, and some are even out because of non-football-related illnesses.

Head-to-Head Data Regarding Utrecht vs Go Ahead Eagles

In the tables below, you can check out the most recent match statistics and math histories between Utrecht and Go Ahead Eagles.

Common Queries About Saturday’s Utrecht vs Go Ahead Eagles 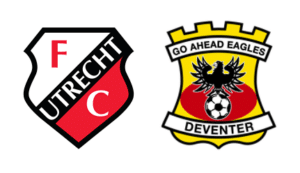