UCD and St. Patrick’s Athletic meet in Dublin in the Irish Premier Division on Monday. Can Pats beat the Students for the second time this season? Read our free predictions and find the latest odds for the fixture below in our detailed match preview.

St. Patrick’s Athletic are targeting their third away win of the campaign when the cross the capital to take on UCD on Monday. Read our top three predictions for this week’s fixture below.

Most observers had tipped UCD to go straight back down this season following their recent promotion and the Students have done little to shake their tag as relegation favourites in 2022. Already propping up the rest in the Premier Division, a campaign of struggle is on the cards for UCD and having already lost once to Dublin rivals St. Patrick’s Athletic last month, a follow up defeat on Monday looks possible.

St. Pats managed to score just a single goal when they beat UCD at Richmond Park last month and to the Students’ credit, they have yet to be taken to the cleaners by any opponent in what is a remarkably low-scoring Irish Premier Division. Indeed, 100% of UCD’s home assignments so far have produced under 2.5 goals and another contest decided by slender margins is anticipated on Monday evening.

Attacker Eoin Doyle has been a useful weapon on the road for St. Patrick’s Athletic this season, and the veteran hitman notched in Pats’ second-last away test at Finn Harps. The 32-year-old, who has experience to burn, was an off-season capture from English side Bolton and Doyle looks a strong bet to add to his early tally against UCD on Monday.

Defender Harvey O’Brien looks like being the only confirmed absentee for UCD again this week. The Students put up a good fight against early pace-setters Derry City in their second-last home fixture, though they were ultimately undone by the Candystripes’ superior class and two second half goals. Manager Andrew Myler will hope to see a similarly spirited performance against Pats.

Patrick Barrett and Jamie Lennon are both carrying injuries and could miss Athletic’s second away game inside the space of four days following their trip to Shamrock Rovers on Friday. Pats finished as runners up in the Premier Division last season, though their chances of repeating that achievement this time around feel slim.

View our rundown of the top stats for Monday’s game below alongside a tool to help you choose the best odds. 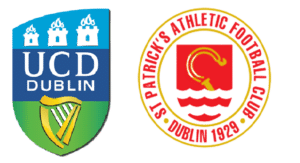 Who is St. Patrick’s Athletic’s manager?

Time Clancy, who joined from Drogheda in December, is St. Patrick’s Athletic’s manager.

Which club is favourite to win on Monday?

The bookmakers have made St. Patrick’s Athletic favourites to win this week.