This game sees top against bottom in the LOI Premiership. Will the leaders make light work of the basement club? Find out with our UCD vs Shamrock Rovers preview here along with the predictions and free tips we mention along the way.

Shamrock Rovers will win but UCD will score

Shamrock Rovers have been unstoppable in recent months; they won their last three games, and are unbeaten in their last 12 games, with nine wins and three draws. Shamrock will be going up against a UCD side that managed just one win in 15 league games. Despite being the worst team in the league however, UCD have scored their fair share of goals recently; they found the net in four of their last five games, and have averaged a goal per game in their last seven games. It’s fair to point out that Shamrock won all of their last 11 clashes with UCD; on that note, we believe that Shamrock will win, and UCD will score.

UCD to trail at the break

Both teams have been involved in a lot of high-scoring games recently; four of UCD’s last five games went over 2.5, while three of Shamrock’s last five games saw at least four goals scored. Furthermore, we should also mention that five of the last six meetings between these teams went above the 2.5 goal mark; with this in mind, this will likely be a high-scoring game.

The best odds for UCD vs Shamrock Rovers

UCD have been the worst team in the Premier Division this season; they won just one of 15 league games so far, with five draws and nine losses. It’s worth noting that UCD are coming off their first win of the season; they’ll hope to string up consecutive wins with the help of Colm Whelan.

On the other hand, Shamrock Rovers have been the best team in the Premier Division this season; they’ve won 11 of 16 league games, with three draws and two losses. Shamrock have won their last three, and eight of their last nine games; they’ll call on Graham Burke to help them get their ninth win in 10 games.

The final word on UCD vs Shamrock Rovers 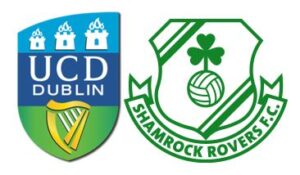