Batlle for Eredivisie top-four will be underway this weekend as Vitesse visits Twente. Both sides are separated by two points and can be exchanging positions at the end of 90 minutes of action.

Free Match Tips from Punditfeed for Twente vs Vitesse

Here are some bias-free tips we have put together for Twente vs Vitesse.

Prior to their 1-3 defeat to Groningen, Vitesse had claimed seven wins in their last eight outings. The ending of that run could not have come at a better time for Twente, who look to maintain their charge at top-three. As it stands, the Reds are the form team in Dutch top-flight football and should claim the three points on offer.

Only Ajax and PSV have scored more than Twente in the last five Eredivisie fixtures. This has seen three of their last five fixtures conclude with Over 2.5 total goals. Vitesse are in a similar category with the same number of Over 2.5 goal games. Their last two meetings brining eight goals with different winners, we believe they will go for each other’s heads in this latest encounter, giving fans and neutrals a goal-scoring extravaganza.

Twente have only conceded three goals in their last five Eredivisie outings. They have kept two clean sheets, both of which came in their most recent outing. Vitesse will not be unfazed by this as they boast off the third-best form on the road in the Netherlands. Two of their three meetings in 2021 saw both sides concede, a result to come to fruition in this fixture.

Ron Jans has been given the task to make Twente title challengers again. While achieving that feat is some time away, the Reds have rallied to the call. They are eyeing continental placement with a top-four finish and can realize this as they stand on ceremony with the best form in Dutch top-flight football of late. Their defence has been instrumental in the process and only cannot praise the likes of Ricky van Wolfswinkel who has continued to plunder goals on his return.

Thomas Letsch has continued the upward trajectory of the Airborne Football Club. He enjoys Chairman Henk Parren’s confidence as Vitesse continue to punch above their weight. With nine wins in their last fifteen competitive outings, the fans will be pleased with their performances. As it stands, all eyes are on young Lois Openda, who is leading their charge with 11 goals to his name.

Looking for the best odds for Twente vs Vitesse? We’ve got you covered. Check out our list of odds from the popular bookies and a few important stats to help you make a good prediction.

FAQ about Twente vs Vitesse 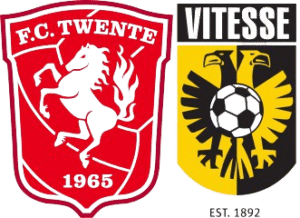 Where is the game being played? De Grolsch Veste.

Where is the game being televised? ESPN (Ned) and Futbol.