Twente and Sparta Rotterdam go head-to-head for three points in Enschede. Twente are targeting another victory in the Eredivisie when they take on relegation-threatened Sparta. Read our free predictions and find the latest odds for the fixture below in our detailed match preview.

Twente put their seven-match unbeaten run on the line when they welcome Sparta to De Grolsch Veste on Friday. Read our top three predictions for this week’s fixture below.

Twente are finishing the season in impressive fashion and their seven-match unbeaten streak in the Eredivisie means that a third-place finish and Champions League qualification could be within reach if they maintain their consistency. The Tukkers haven’t lost a league match in Enschede since October and they can be backed with confidence to ease past bottom club Sparta on Friday evening.

Ron Jans’ Twente have produced some impressive defensive performances in recent weeks and the Tukkers have kept four clean sheets in their last five Eredivisie assignments. Last placed Sparta meanwhile, have been unsurprisingly limp in the final third, especially on the road, where they have failed to register in three of their last four attempts. Their toothless frontline could struggle to penetrate Twente’s organised ranks, so back the hosts to claim another shut out.

In Sparta’s last away test they shipped three goals against a usually shot-shy Fortuna side and that was the third time in four fixtures on their travels where Henk Fraser’s relegation contenders conceded at least twice. Twente have rattled the net five times in their last two outings alone and they have the firepower to blast holes in their visitor’s wafer-thin defences. With that in mind, a stake on the Tukkers in the over 1.5 team goals market appeals at the prices on offer.

Ennio van der Gouw is Twente’s only injury concern this week and apart from their absent goalkeeper, the Tukkers have a strong squad to choose from on Friday. Twente took full advantage of a second-half red card for their hosts when they beat NEC 2-0 in Nijmegen in their last Eredivisie fixture all the way back on April 9th. Twente can draw level on points with third-placed Feyenoord this week with the right set of results.

Sparta have a clean bill of health ahead of their trip to Enschede to play Twente this week. Henk Fraser’s charges were toppled 3-0 at Fortuna Sittard last time out in what felt like a significant result in the battle for survival in the Eredivisie. Sparta are now four points from safety with a handful of games left to contest.

Top Betting Odds and Stats for Twente vs Sparta Rotterdam

Below you can discover our list of the best stats for Friday’s game alongside a tool to help you choose the best odds. 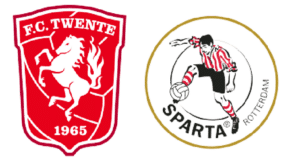 Twente vs Sparta Rotterdam will be contested at De Grolsch Veste.