In this article, we will go over the upcoming Twente vs Go Ahead Eagles fixture and see the best predictions and free betting tips for it. If you are interested in seeing more Eredivisie fixtures, you can check out our website.

These are the latest Twente vs Go Ahead Eagles match predictions and free betting tips for their upcoming fixture this weekend.

Twente seems to have the upper hand in this fixture for more than one reason. They won three of the last five matches they played against Go Ahead Eagles and their recent form has been better. Out of the last five games, Go Ahead Eagles lost four, while Twente lost only one of their latest games. The nineteen-point difference between the two teams is also telling and Twente is in the lead compared to Go Ahead Eagles who are only three points away from the relegation section.

Twente is our favorite even though they have to play without three of their players due to injuries. They not only have the h2h advantage, but they also have the form to back them up against their opponent.

Go Ahead Eagles don’t have the recent form to take on Twente and their history against them isn’t as positive as they would have liked. Two players won’t play this weekend because of health-related problems.

You should check out the odds and match statistics below for the upcoming Twente vs Go Ahead Eagles fixture this weekend. 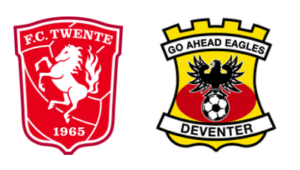