Round 37 of La Liga 2 will start with the Tenerife vs Huesca duel and we have prepared an interesting preview of the game for you, followed by some free betting tips.

Our favourite Tenerife vs Huesca betting predictions and picks

If you need help to find the best bet for the Tenerife vs Huesca duel, check our top betting tips for this game:

The home team is currently fourth in the standings and only a few points behind the teams in the first two places, so they have reasons to hope to earn a direct promotion to La Liga.

Meanwhile, Huesca has only theoretical chances to reach the playoffs this season, but they are in good form at the moment since they are without a loss in the last five games. Still, we expect Tenerife to win this game at home and stay in the race for promotion.

The reason is simple – four of the previous five head-to-head meetings between Tenerife and Huesca have gone over 2.5 total goals, so we can see that happening again on Friday.

Both teams have scored in three of the last four h2h duels between Tenerife and Huesca and we wouldn’t be surprised at all if that is the case in their next game as well.

After all, both teams scored in 50% of all Tenerife matches in the league this season, while the same is true for 47% of Huesca games in La Liga 2 until now.

Tenerife vs Huesca preview: Can Tenerife earn a direct promotion?

With 62 points from 36 games, Tenerife is currently fourth in the standings of La Liga 2 and they have almost certainly secured a spot in the playoffs. However, the team is also just five points behind Almeria, who is sitting in second place, which leads to direct promotion to La Liga next season. In the last six games, Tenerife has three wins, one draw, and two losses.

This season has certainly been a disappointing one for Huesca fans who expected their team to be fighting for promotion after being relegated from La Liga last season. However, their team is currently in the ninth place in the standings and eight points behind the team in sixth place, the last one to lead to the playoffs.

The best odds and key stats for Tenerife vs Huesca

If you want to check out some of the key stats and odds for Tenerife vs Huesca, you’ve come to the right place:

The most common questions for Tenerife vs Huesca 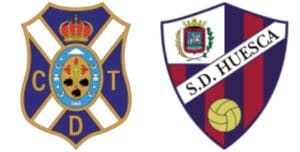