The last game of this La Liga 2 round is the Tenerife vs Almeria duel. With that in mind, we have prepared a detailed preview of this game for you, along with some free betting tips.

Out favourite Tenerife vs Almeria betting tips and picks

If you are unsure how to choose the best bet for Tenerife vs Almeria, check our top betting predictions for this duel:

Both Tenerife and Almeria are fighting for the top two spots in the standings and a direct promotion to La Liga 2, so this is a very important game for both teams.

So, we clearly expect a very close game, but we feel that Almeria can take the win here. After all, they are four points ahead of Tenerife right now and they’ve beaten them in four of their last five h2h meetings.

Three of the last five head-to-head duels between Tenerife and Almeria have gone over 2.5 total goals, so we expect the same thing to happen on Monday as well.

Both teams have scored in three of the previous five h2h meetings between Tenerife and Almeria and we expect that to be the case in their next game too.

Unlike their opponent, Tenerife is doing very well this season since they are currently fourth in the league and looking certain to make it to the playoffs at least. In the last five games in La Liga 2, Tenerife has two wins, one draw, and two losses, so they are not in their best form at this moment.

The team from Almeria is currently in the second place in the standings, which would take them directly to La Liga next season. However, a few other teams are only points behind and we will certainly be seeing a very exciting race for the first two spots until the end of the season. Almeria has four wins and a loss in the last five matches in the league.

The highest odds and key stats for Tenerife vs Almeria

If you are looking for the best Tenerife vs Almeria odds, check our selection of odds taken from the top UK betting websites: 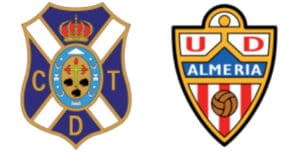