MK Dons travel all the way up north for a game against Sunderland at the Stadium of Light. This League One encounter is crucial in the battle for the play-offs.

Sunderland brought an end to 3 consecutive losses but they could only get a 1-1 draw against Wimbledon away from home. Pritchard’s freekick came to the rescue of Sunderland after McCormick’s early penalty. MK Dons were held to a goalless draw with Ipswich at the Den.

Draw or victory for MK Dons

Sunderland have not been playing well of late and the club has been slipping in the race for promotion. Even though MK Dons have not managed to win in the last two outings, they are at least playing well. MK Dons picked up a victory in the last trip to the Stadium of Light and they will be quite confident about getting something out of this fixture this time around.

The match features two teams who are very closely matched in terms of points, goals scored, and goals conceded so far this season. Sunderland’s priority might be to stop the rot and a defeat could hurt the team a lot more in the play-off race.

MK Dons were able to score in four consecutive league outings before being held by Ipswich. Sunderland’s defence has conceded a whopping 12 goals in the last six matches and they will present MK Dons with opportunities. Even though Sunderland may not be offensively great, they are likely to get a goal or two from set piece situations like they did against Wimbledon.

Sunderland vs MK Dons: More Troubles for the Black Cats?

Sunderland boss Alex Neil has had a disappointing start to his tenure at the Stadium of Light. Even as he continues to learn his squad, Neil will be without the likes of Jordan Willis, Ellis Taylor, Niall Huggins, Nathan Broadhead, and Lee Burge because of injuries. Aidan McGeady and Luke O’Nien might be back in training after the injury problems, but this game might come too soon for the duo.

MK Dons have continued a strong rise in the league table with an unbeaten run that has now stretched to five matches. Coach Liam Manning could be making no changes to the squad that only produced a goalless draw with Ipswich Town last weekend.

Analysis of Recent Form and Stats for Sunderland vs MK Dons 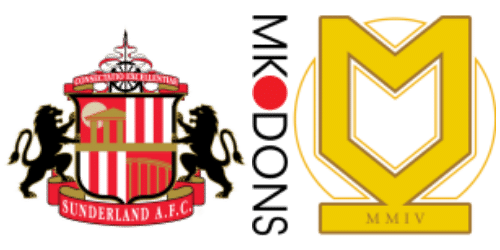