Stevenage look to continue their impressive form in the league by bouncing back from the recent defeat when they take on strugglers Harrogate at the Lamex Stadium.

Stevenage suffered a major blow in the race for promotion when the team suffered a 3-0 loss against Bradford City. Meanwhile, Harrogate Town have ended up picking up a crucial point from the match against Stockport County that finished as a goalless draw.

Stevenage to pick up three points

Harrogate are yet to score away from home against Stevenage and they have also conceded four goals in these two matches. Meanwhile, Stevenage will be keen on coming up with a big score and they are certainly capable of doing the same after managing 11 goals so far this season. If there are any goals in this game, it is likely to be only from Stevenage.

Harrogate have had a nightmare time in front of goal with three in the last six matches. Even though Stevenage have had a mixed run at the back, they are likely to have an easy time out in this fixture.

Stevenage have a 100% home record against Harrogate after picking up two comfortable victories against this opponent whenever this fixture has been played out at the Lamex Stadium. Steve Evans comes into the game without any major injury problems in the squad and this will allow him to rotate the starting line-up.

Harrogate manager Simon Weaver has never been able to pick up a victory against Stevenage in his entire coaching career and he has come up against Stevenage on four occasions. The 44-year-old also has to deal with a lengthy injury list with Will Smith, George Thompson, Stephen Dooley, and Max Wright and available because of injuries. George Horbury is suspended for the fixture while Josh Falkingham is doubtful for the game.

Stats, H2H, and Numbers for Stevenage vs Cambridge

FAQs on Stevenage vs Harrogate game 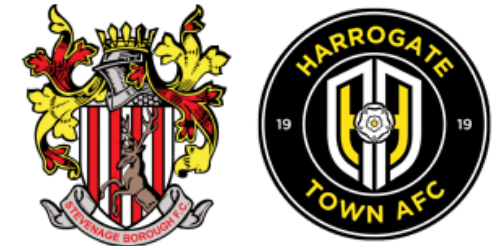 Where is the match going to take place? The Lamex Stadium

Who is the favourite team to win the game? Stevenage