Over 1.5 Total Goals First Half

One of the three Bundesliga 2 matches scheduled for Saturday is the St. Pauli vs Magdeburg duel. If you want to know more about it, check our free betting tips and our preview of the game.

Our latest St. Pauli vs Magdeburg betting picks and predictions

If you need some help to decide what is the right bet for St. Pauli vs Magdeburg, check our top betting tips for this game:

While St. Pauli was fifth in Bundesliga 2 last season, Magdeburg had to earn promotion to this tier of German football. Meanwhile, both teams started the new season in similar fashion – St. Pauli with four points, Magdeburg with three points from the first three games.

In any case, we expect St. Pauli to win this game. They are certainly the better team on paper and they will play at home, which should be enough to get the three points. On top of that, St. Pauli beat Magdeburg in their last three h2h meetings.

While we believe that St. Pauli will win this game, that’s far from certain. What is certain, however, is that we will see some goals. Our prediction is for this game to go over 3.5 total goals.

After all, two of the last three h2h duels between these teams have gone over 3.5 total goals, while the average for those three games was 4.33 goals per game. Furthermore, St. Pauli averaged 4.00 goals per game and Magdeburg averaged 3.67 goals per game so far in Bundesliga 2.

Over 1.5 Total Goals in First Half

Since we expect to see at least four goals in this game, we also expect to see two goals or more in the first half of this duel, which was the case in all three most recent head-to-head duels between St. Pauli and Magdeburg.

In addition to this, we saw at least two goals in the first half in two of the three games played by St. Pauli in the league so far, while the same is true for two of the three Magdeburg matches in Bundesliga 2 this season.

St. Pauli vs Magdeburg preview: An easy job for the home team?

Last season was a good one for St. Pauli who came close to making the playoffs, but the team started the new season in an inconsistent fashion, with one win, one draw, and one loss. Still, with a win at home in the next game, they would join the top half of the standings, which would make it a good start. Meanwhile, Dzwigala, Vaslij, and Avevor are on the team’s injury list at the moment.

Although they were convincingly first in the third rank of German football last season, nobody expected Magdeburg to have it easy back in Bundesliga 2. So, one win and a couple of losses in the first three rounds of the new season are pretty much in line with expectations for this team. On top of that, Lawrence is suspended for the next game, while Bittroff, Schuler, and El Hankouri are injured.

The highest odds and top stats for St. Pauli vs Magdeburg

If you want to check the top odds for the St. Pauli vs Magdeburg duel, you’ve come to the right place:

The most frequent questions for for St. Pauli vs Magdeburg 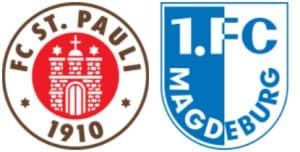