There has been little between these sides this season. Will this game see a winner? Find out with our St Patrick’s Athletic vs Bohemians preview here along with the predictions and free tips we mention along the way.

St Patrick’s have not done too well at home recently; their last two losses came at home, and they’ve won just one of their last five home games. In comparison, Bohemians have enjoyed some relatively better form in recent weeks; they have three wins in their last six games, and have suffered just two losses in their last nine games. All things considered, we believe that Bohemians can steal at least one point from this game.

Finally, we’ll take a look at the over/under goals market; both teams have had their fair share of high-scoring games. It’s worth noting that six of Bohemians’ last seven, and three of St Patrick’s last five games went above the 2.5 goal mark. Furthermore, four of the last six meetings between these teams went over 2.5; and on that note, we should expect some goals here.

The best odds for St Patrick’s Athletic vs Bohemians

St Patrick’s are coming off a disappointing 2:1 home loss to Shelbourne; they are now without a win in their last three games, with two draws and a loss. Tim Clancy’s men will hope to take all three points as Bohemians come visiting; it’ll be interesting to see how they’ll fare with Eoin Doyle leading the attack.

Bohemians have had some mixed results in recent weeks; they’ve won two, drawn one and lost two of their last five games. Bohemians will fancy their chances against a struggling St Patrick’s side; it’s worth keeping an eye out for Dawson Devoy.

The final word on St Patrick’s Athletic vs Bohemians 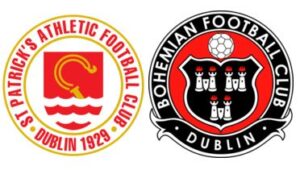