St. Mirren and Hibs meet at The SMISA Stadium in the Scottish Premiership on Saturday. Two clubs in poor form clash in Paisley. Read our free predictions and find the latest odds for the fixture below in our detailed match preview.

Both St. Mirren and Hibs are in poor form ahead of their clash in the Scottish Premiership on Saturday. Read our top three predictions for this weekend’s fixture below.

Confidence in both the St. Mirren (one win in eight) and Hibs (one win in 13) camps will be low following poor runs of results for both teams and with neither side backable in the markets, a draw could be the outcome worth chasing this weekend. Two of the three encounters between the sides this term finished all square and another share of the spoils seems like the likeliest resolution at The SMISA Stadium.

When St. Mirren and Hibernian last met at Easter Road back in February, a single Connor Ronan strike was enough to earn the Saints maximum points and another low-scoring contest is on the menu when the teams meet again on Saturday. St. Mirren have notched just five times in their last eight Premiership assignments, while Hibs have registered only five goals in their last ten league matches combined. Don’t expect fireworks in Paisley this weekend.

If there is action of some description to consume on Saturday then recent evidence suggests it could arrive in the second half of the game. Of the seven goals scored in the three meetings between the Saints and Hibs earlier this term, six of the efforts were posted after the interval. With self-belief at both clubs in short supply, a tentative start by both is anticipated again on Saturday and bettors are advised to back the second half to see more goals than the first.

St. Mirren could be without four players this weekend. Greg Kiltie, Ryan Flynn, Scott Tanser and Matthew Millar are all nursing varying ailments. The Saints have lost six of their last seven Premiership matches and they conceded eight times in their last two games in the top flight alone.

Kyle Magennis, Kevin Nisbet and Demetri Mitchell could all be out for Hibs this weekend while defender Ryan Porteous is still serving a suspension. Hibs were beaten twice by Edinburgh rivals Hearts in their last two contests and those successive league and FA Cup semi-final defeats to their neighbours would have sent confidence levels plummeting.

Top Betting Odds and Stats for St. Mirren vs Hibs

Check out our list of the best stats for Saturday’s game below alongside a tool to help you choose the best odds. 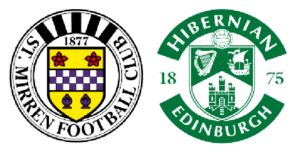 Who is St. Mirren’s top scorer this season?

Connor Ronan and Eamonn Brophy are St. Mirren’s joint-leading scorers in the Premiership this season with seven goals each.

Which clubs is favourite to win this weekend?

Hibernian have been priced as favourites to beat St. Mirren on Saturday.