The Sporting Gijon vs Girona duel in the upcoming round of La Liga 2 is certainly one of the more interesting ones, with both teams still looking for points. So, check our detailed preview of this game to learn more about it and to get some free betting tips.

Our top betting tips and predictions for Sporting Gijon vs Girona

If you are struggling to find the right bet for Sporting Gijon vs Girona, check our favourite betting picks for this duel:

Sporting Gijon and Girona to Draw

After a string of bad results in the last couple of months Sporting Gijon is now just two points ahead of Real Sociedad B, the first team in the relegation zone.

Meanwhile, Girona is fifth and trying to secure a spot in the playoffs, but they are just one point ahead of Ponferradina with three games left to be played. So, we can see this game ending in a draw since both teams are hoping for points.

Sporting Gijon and Girona to Draw at Half Time

Since we can see this game ending without a winner, we can also see the two teams being tied at half time. After all, that is often the case for games that end in a draw.

In addition to this, three of the last five head-to-head duels between Sporting Gijon and Girona have been tied at half times, so we can see that happening once again on Sunday.

Four of the previous five h2h meetings between Sporting Gijon and Girona have gone under 2.5 total goals and we don’t see any reason why their next game should be different.

While Sporting Gijon fans probably hoped for their team to fight for promotion or at least end up in the top half of the standings, Sporting is currently dangerously close to being relegated from Segunda. At the moment, they are just two points ahead of the first team in the relegation zone, with three rounds left in the season. Meanwhile, Sporting is without a win in the last six games in the league.

Three wins and three losses in the last six matches in La Liga 2 is not that great, but it has been enough to keep Girona in the fifth place and fighting for a spot in the playoffs. At the moment, Girona is one point ahead of Ponferradina and three points ahead of Las Palmas, the first two teams outside of the playoffs zone, so they need to add some more points to their tally if they want to see the playoffs.

The best odds and useful stats for Sporting Gijon vs Girona

If you want to bet on the highest Sporting Gijon vs Girona odds, check our selection of odds from the main UK betting sites:

FAQ for Sporting Gijon vs Girona 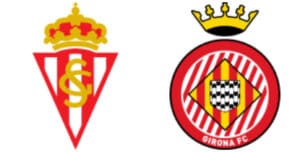