The Rights Predictions and Picks for Sporting Charleroi vs KV Oostende

Both teams have one win at home and one loss playing away. Playing at home is an important factor that influences the performance of both teams. To set the right bet for Sporting Charleroi vs KV Oostende, read about our predictions and betting tips for free:

Although both teams are level on three points, we think the hosts will triumph. The home side is odds-on favourites, as Charleroi have won five of the last six h2h. De Kustboys have not scored at the Charleroi ground since 2019.

We expect a good amount of goals in the Sporting Charleroi vs KV Oostende matchup. In Charleroi’s previous four matches at home, the result has been more than 2.5 goals. The visitors have scored at least one goal in nine of the last ten matches.

The home team will likely score, as in the last ten meetings with Oostende they have put the ball in the net at least once. De Kustboys have fifteen clean sheets in their last fifteen matches. Oostende striker David Atanga has a good goal average, so he may score.

Will Home Advantage Be The Deciding Factor?

The Zebras were unable to repeat the result of their debut, where they took all three points at home. This time they were beaten 1-0 away to Saint-Gilloise on matchday 2 of the Pro league.

Despite being as good as their opponents at keeping ball possession, Charleroi was unable to take advantage of the space given away by their opponents. The Zebras’ best player was goalkeeper Herve Koffi, who made multiple saves to prevent Saint-Gilloise from scoring more goals.

De Kustboys had a bitter defeat in their visit to Anderlecht, where they lost 2-0. In the second matchday, the team coached by Yves Vanderhaeghe had a better performance at home, where they defeated Mechelen with the support of their fans.

The Oostende players had an excellent first half, especially David Atanga who scored a brace in that period. Things got a bit complicated after Alessandro Albanese was sent off in the 53rd minute for a bad foul. Still, Machelen only reduced the goal differences to one.

If you want to bet on the top odds for Sporting Charleroi vs KV Oostende, check our selection of odds from the best betting sites: 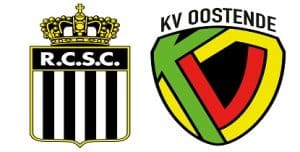 Who is the bookmakers’ favourite to win? The more probable winner is KV Oostende at 4/7 (1.57) Odds