Sparta Rotterdam and AZ clash in the Eredivisie on Saturday. Bottom club Sparta are running out of time to secure safety. Read our free predictions and find the latest odds for the fixture below in our detailed match preview.

Bottom club Sparta have lost three of their last four Eredivisie fixtures ahead of another tough test against AZ on Saturday. Read our top three predictions for this weekend’s fixture below.

Rock bottom Sparta lost for the third time in four matches when they were beaten at Twente last time out and with just a handful of fixtures left to contest, relegation is a real possibility this season. In the aftermath of that loss, Maurice Steijn replaced sacked boss Henk Fraser and Sparta will hope to see a new manager bounce this week. A strong AZ outfit will arrive in Rotterdam determined to take advantage of their host’s upheaval however, and having won five of their last seven assignments on the road, Pascal Jansen’s away-day specialists are favoured to triumph.

While their results at the Sparta-Stadion Het Kasteel have been mixed, Sparta have at least retained a measure of threat in the final third and the relegation candidates have notched in six of their last seven fixtures on home soil. That record suggests Sparta have the tools to net a consolation on Saturday, just as they did when they lost 3-1 to AZ back in December. With that considered, backing both teams to score looks a solid choice.

Swedish attacker Jesper Karlsson bagged two of AZ’s goals when they eased to a 3-1 victory over Sparta in Alkmaar back in December and the 23-year-old can add to his 15-goal tally for the campaign against the same opponents on Saturday. With two strikes in his last three appearances, Karlsson is looking sharp and the ex- Elfsborg frontman can make his presence felt again this weekend.

Michael Goncalves Pinto and Mario Engels are both sidelined for Sparta this week. Sparta have a new manager at the helm after Maurice Steijn – who was due to join in the summer – decided to take up his role early in a bid to mastermind a great escape. With his squad severely low on confidence, Steijn has it all to do however.

Mohdammed Tabbouni is still out for AZ, though Yusuf Barasi and Jelle Duin could be back in contention. AZ came from behind to beat Heerenveen 2-1 in Alkmaar last time out and they have lost just twice in 19 Eredivisie fixtures overall since early November.

Top Betting Odds and Stats for Sparta Rotterdam vs AZ

Check out our rundown of the best stats for Saturday’s match below alongside a tool to help you choose the best odds. 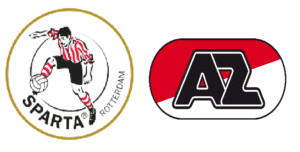 AZ have been priced as favourites to win this weekend.

Who is Sparta Rotterdam’s manager?