An expected easy game for Ajax is ahead of us on the 28th of November, but can Sparta Rotterdam turn the tables? W will see that on Sunday, but until then check out our experts’ predictions for the upcoming match below.

This is a rivalry that isn’t going great for Sparta Rotterdam at all with the most recent 10 games resulting in 9 victories for Ajax and 1 game being tied. Ajax does have a lot on the plate as the schedule is very tight, they will have to travel to Turkey for their Champions League game as well but we still consider them the favorites to win this game. Their most recent 2 games were draws and PSV already caught up to them in Eredivisie. More points can’t be lost especially to such a comfortable opponent.

The chance for Ajax to win is great, the question is by how much. Considering their Champions league game, we predict a 0:1 or 0:2 victory due to players being tired or coach Erik ten Had deciding to rest key players for this game. 3 of the last league games for Ajax ended in 2 or fewer goals. Meanwhile, Sparta Rotterdam had 4 games with 2 or fewer goals in the last 5 games.

Historically speaking, it’s a 50-50 shot. 5 of the last 10 games ended in one of the teams not scoring a goal. In Eredivisie, things are looking good for this prediction too. The last 4 league games for Sparta all ended in either Sparta or the opponents not scoring a goal. Meanwhile, Ajax hasn’t allowed a single goal in the last 9 Eredivisie games.

Ajax to get a routine victory

The title says it all – Ajax will achieve an easy routine victory and get back on the right track to defending their Eredivisie title. Not allowing a single goal in 9 games is a record that is quite impressive so will the currently ranked 16th team manage to even score a goal? Probably not. Ajax has all the momentum going for them and a narrow win is very likely here.

Head-to-head data for the Sparta Rotterdam vs Ajax game

Those are the key head-to-head statistics and odds for Sparta Rotterdam vs Ajax match: 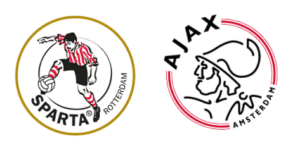