Sligo Rovers host Shamrock Rovers at The Showgrounds in the Premier Division on Friday. The Hoops are aiming to win their sixth game on the bounce when they head west to play Sligo.Read our free predictions and find the latest odds for the fixture below in our detailed match preview.

In-form Shamrock Rovers have their eyes on top spot as they cross the country to face Sligo on Friday evening. Read our top three predictions for this week’s fixture below.

After a patchy start by their own high standards, Shamrock Rovers have really hit their stride of late and on Friday, the defending champions are hunting down their sixth straight Premier Division victory. The Hoops’ 3-1 win at local rivals Bohemians last time out was a wake-up call to their title challengers and red-hot Rovers should be able to pocket another three points at Sligo’s expense at The Showgrounds.

There are still issues to iron out for Shamrock Rovers however, particularly at the back where they have kept just two clean sheets in six away assignments so far. The Hoops also conceded twice when sharing the spoils with Sligo in Dublin last month (2-2) and a shut out at The Showgrounds against a Rovers side that has notched five times in their last two home fixtures feels unlikely. With that considered, we recommend backing both teams to score on Friday evening.

Shamrock Rovers look like they mean business as they begin to crank up the intensity of their title defence and having scored the game’s opening goal in each of their last five matches, we’re backing them to repeat the trick at Sligo. The Hoops were ahead after just five minutes of their last test at Bohemians and their knack for fast starts opens up a window of opportunity in the first team to score market this week.

Sligo Rovers haven’t reported any fresh injury issues ahead of Friday evening’s fixture. The Bit O’Reds struck late on to oust Drogheda in their last Premier Division game, just a few days after another victory at Finn Harps (1-0). However, two of their last four games at The Showgrounds have ended in defeat.

Stephen Bradley is sweating on the fitness of star forward Graham Burke this week, though the 28-year-old attacker remains a doubt with a muscle strain. The Hoops have closed the gap on early leaders Derry to just one point at the summit of the table and Rovers will need to keep stringing wins together to reclaim top spot.

Read our list of the top stats for Friday’s game alongside a tool to help you choose the best odds. 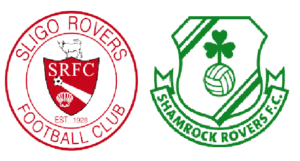 Shamrock Rovers are the bookmakers’s favourites to prevail this week.

The Showgrounds will host Sligo Rovers meeting with Shamrock Rovers on Friday evening.