Besiktas travel to the Yeni Sivas 4 Eylül Stadyumu with the hope that this visit turns out to be much better than their recent away matches against Sivasspor in recent years.

Sivasspor could not build on the back-to-back wins, as the team suffered a 1-0 defeat to Fatih Karagumruk in the recent game. Fabio Borini’s penalty in the second-half turned out to be the only difference between the two clubs. Besiktas were finally able to end a winless in the Super Lig after getting a narrow 1-0 success over Altay. Vida’s second-half goal was the only difference between the two clubs.

Besiktas still struggle to go on the offensive and score a lot of goals. In the year 2022’s domestic league action, Besiktas have scored more than 1.5 goals in just one game. Besiktas have particularly struggled in away matches against Sivasspor after picking up just one victory in the last four visits. Sivasspor have also been struggling on several fronts, but they have gone unbeaten in 13 games at home. A significant chunk of these matches have been draws.

Besiktas and Sivasspor are two clubs in the Turkish Super Lig who have been going through a spell of struggle in the final third. Both clubs have averaged more than a goal per game in the last six matches. The last game between these two teams on this ground finished as goalless draw.

Besiktas have just come on the back of two games in the last four league encounters that have finished with a 1-1 score. Sivasspor have witnessed the same score in three out of the last four home league games.

Riza Calimbay comes into the match after having a nearly suffered at the hands of Besiktas. He has lost 20 out of the 34 games against the visitors. For this game, Calimbay will be without Leke James due to a knee injury, while Max-Alain Gradel is under suspension. Even though Fredrik Ulvestad and Ahmet Oguz are back in training, they will undergo a late fitness test to decide their participation in this match.

Besiktas manager Onder Karaveli has failed to spark a substantial improvement in form since becoming the key figure in the dugout in January, but Besiktas have been defensively a little solid. Miralem Pjanic, Georges-Kévin Nkoudou, Fehmi Mert Günok, and Oguzhan Özyakup are missing for the game due to injuries, while Cyle Larin and Ridvan Yilmaz are also suffering from niggling problems.

Analysis of Form and Stats for Sivasspor vs Besiktas

FAQs on Sivasspor vs Besiktas game 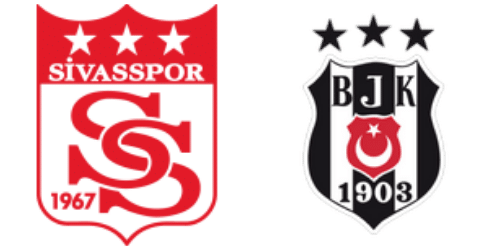 Where is the match going to take place? Yeni Sivas 4 Eylül Stadyumu

Who is the favourite team to win the game? Sivasspor