Both of these sides are going along okay in the Belgian Pro League without pulling up any trees. Who will win as they meet? Find out with our Sint-Truiden vs Mechelen preview here along with the predictions and free tips we mention along the way.

Mechelen have won four of their last six games, and they’ve lost just once in that stretch; however, it’s worth noting that their opponents have had an impressive streak recently. Sint-Truidense have not conceded a single goal in their last three games; they have no losses in their last four games, and they’ve won three of those four games. Additionally Sint-Truidense won the last two encounters between these sides, including the reverse fixture this season; they’ve also won four of the last five times Mechelen came visiting. With this in mind, we’re predicting a win for Sint-Truidense.

Both sides will be amongst the goals

Sint-Truidense have scored their fair share of goals recently; they’ve scored six goals in their last four games, whilst conceding just one goal. However, despite their solid defense, it’ll be difficult to shut out Mechelen. Mechelen have scored in all of their last six games; they’ve averaged just over 2 goals per game in those six games, with 13 goals scored. Conversely, Mechelen have not done a very good job defensively; they’ve conceded in their last three, and seven of their last eight games. On that note, we should expect goals at both ends.

It should be a good watch

Lastly, we’ll take a look at the over/under goals market. We’ve already mentioned that Mechelen averaged over 2 goals per game in their last six games; we would also like to point out that their games tend to be on the high-scoring side. All of Mechelen’s last six games went above the 2.5 goal mark; with three of their last five games going over 3.5. Furthermore, encounters between these two have produced a lot of goals, especially at this stadium; there were more than three goals scored in five of Mechelen’s last six visits to this stadium. For this reason, we believe that this will be a high-scoring affair.

The best odds for Sint-Truiden vs Mechelen

Sint-Truidense have been slowly climbing up the First Division A table recently; they are unbeaten in their last four games, with three wins and a draw. Sint-Truidense are six points behind a potential Championship qualifying round spot; will Christian Brüls be able to lead his team to victory?

Mechelen have equally enjoyed some good form lately; they have no losses in their last two games, and they’ve lost just one of their last six games, with four wins and a draw. Wouter Vrancken’s men will hope to take one of the automatic Championship round spots; it’ll be interesting to see how they’ll fare with Nikola Storm leading the attack.

The final word on Sint-Truiden vs Mechelen 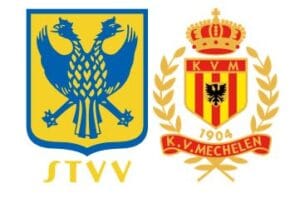