Shrewsbury and Oxford go head-to-head at Montgomery Waters Meadow in League One on Saturday. High-flying Oxford are targeting more points to aid their promotion push. Read our free predictions and find the latest odds for the fixture below in our detailed match preview.

Oxford have won four of their last five fixtures in League One ahead of their latest test at Shrewsbury. Read our top three predictions for this weekend’s fixture below.

Fourth-placed Oxford have found a new gear of late and their 4-1 win over Burton Albion last weekend was their fifth victory in six League One assignments. Struggling Shrewsbury meanwhile, have managed to claim maximum points just once in their last 11 matches in the third tier and they could find the going tough again on Saturday against their red-hot visitors.

With recent signing Sam Baldock a key component, Oxford have been playing with a real swagger in attack of late and United have rattled the net a hugely impressive 15 times in their last five League One fixtures. Oxford scored at least two goals in all but one of the same games and having plundered at least two efforts in each of their last four encounters with Shrewsbury, Karl Robinson’s charges look a superb option in the over 1.5 team goals market again this weekend.

Sam Baldock had been plying his trade in the Championship for many years before he signed for Oxford last month and the 32-year-old has looked a cut above at a lower level. Baldock has already registered four times in just seven appearances for United in League One and the centre-forward bagged an impressive brace against Burton last time out. With his confidence topped up, Baldock is an option worth considering in the anytime goalscorer market this week.

Top Betting Odds and Stats for Shrewsbury vs Oxford

View our rundown of the top stats for Saturday’s game below alongside a tool to help you pick the best odds. 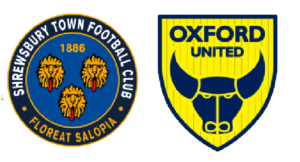 Shrewsbury vs Oxford will be played at Montgomery Waters Meadow.

Who is Oxford’s top scorer this season?

With a notable 18 goals in League One so far, Matt Taylor is Oxford’s leading scorer this season.