Montgomery Waters Meadow gets ready to host the first League One match of the campaign when Accrington Stanley visit the ground this weekend. Shrewsbury Town are looking to pick up their first win of the season.

Shrewsbury Town had to settle for a goalless draw with Morecambe in the first game of the campaign. Accrington Stanley could not make the most of home advantage against Charlton, as they had to finish with a 2-2 draw after coming back from behind twice in the game.

The two teams opened the new season with a draw although in very different circumstances. Shrewsbury were involved in a goalless draw while Accrington had a stalemate that involved four goals. This is a fixture that has largely been unable to provide any major success for Accrington or Shrewsbury in recent years with three out of the last four meetings finishing as a stalemate.

This fixture has been very difficult to call in the last two seasons with only one of the four meetings producing more than 2.5 goals. Shrewsbury have just seen Accrington produce an incredible fightback, but it is difficult to expect John Coleman’s team producing the same in away matches. This might be a low scoring fixture.

Even though Shrewsbury open to the new season with a clean sheet, they are unlikely to do so against the strength of Accrington. The two teams will cancel out each other but after having scored a goal.

Shrewsbury might remain as a contender for relegation after having finished in the bottom half of last season. Even though the team has strengthened in the summer, there is only a small level of optimism within the club. Manager Steve Cotterill comes into the game after having registered only one win against Accrington in his managerial career.

Accrington might have finished in the mid-table spots in consecutive seasons, but they may lack the quality to push for promotion due to their poor form. After conceding two goals in the opening game of the campaign, manager John Coleman knows that he still has to work on a lot of aspects. Joe Pritchard might miss this game because of a hamstring injury.

Detailed Stats and Numbers for Shrewsbury Town vs Accrington Stanley 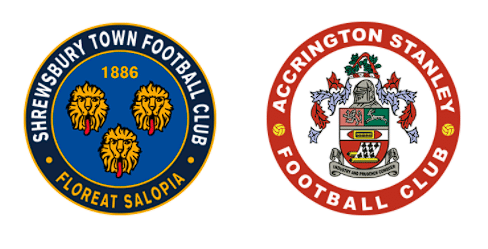 Who is the favourite team to win the game? Shrewsbury Town