After a win for Shamrock Rovers in the first leg, Shkupi will now host the second leg of the Europa League Qualifiers between these two teams. Check our preview of the game to learn more about it and to get some free betting tips.

Our favourite Shkupi vs Shamrock Rovers betting predictions and picks

If you are uncertain about the right bet for the Shkupi vs Shamrock Rovers duel, check our top betting tips for this game right here:

Although Shamrock Rovers were pretty dominant in the first leg and they come into the second leg with a two-goal advantage, we expect to see a different game now.

After all, both of these teams look very different when playing at home and when they are guests, so we can see Shkupi edging out a win in the second leg. Whether they can overcome the two-goal difference, we are not so sure.

Since we saw four goals in the first leg between Shkupi and Shamrock Rovers, we can see the second game ending with at least three goals being scored as well.

Furthermore, Shkupi has gone over 2.5 total goals in four of their last six games across the board, while the same is true for four of the last six Shamrock Rovers matches in all competitions.

As we already mentioned, we saw both teams score in the first leg between Shkupi and Shamrock Rovers, so we won’t be surprised if the same thing happens on Tuesday.

After all, the home team will have to chase a two-goal difference and they will have to attack from the start, which will also leave a lot of room for Shamrock Rovers on counter attacks.

Shkupi vs Shamrock Rovers preview: Can the guests defend the advantage?

The reigning champions of Macedonia had some solid performances against Dinamo Zagreb in CL Qualifiers, but they still ended up getting eliminated. Their goal is not to make it to Europa League group stages, but Shkupi will have to do much better in the second leg against Shamrock Rovers if they are to overcome the two-goal deficit from the first leg.

Just like their opponents in EL Qualifiers, Shamrock Rovers was also eliminated from CL Qualifiers earlier against Ludogorets, but they were only beaten by one goal on aggregate. The team is also leading the league once again after 24 rounds, with a six-point advantage over Dundalk. So, it’s safe to say that they are in pretty good shape ahead of the second-leg against Shkupi.

The best odds, stats, and more for Shkupi vs Shamrock Rovers

If you wish to bet on the highest Shkupi vs Shamrock Rovers odds, check our selection of odds from the main UK bookies: 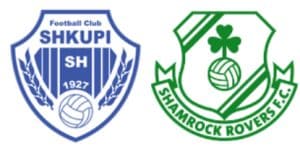