Club Brugge are running out of time if they’re to snatch the Belgian Pro title. Can they take a much needed three points here? Find out with our Seraing vs Club Brugge preview here along with the predictions and free tips we mention along the way.

Brugge to win it with a clean sheet to boot

Club Brugge to lead at HT

Finally, we’ll take a look at the BTTS market. Club Brugge have kept their fair share of clean sheets recently; they did not concede in four of their last eight games. On the other hand, Seraing have been the lowest scoring team in the league this season; they did not score a single goal in their last five games, and they failed to score in 10 of their last 12 games. At least one side blanked in five of Club Brugge’s last eight, and in 10 of Seraing’s last 12 games. On that note, one of these teams should fail to score.

The best odds for Seraing vs Club Brugge

Seraing have been one of the worst teams in the league this season; they’ve lost four in a row, and they’ve won just one of their last 14 games in all competitions. Seraing will hope to snap their losing streak as Club Brugge come visiting; it’ll be interesting to see how they’ll fare with Georges Mikautadze spearheading the attack.

Club Brugge’s three match winning streak ended in the Belgian Cup against Gent a few days ago; they will turn their attention to the league, where they are seven points behind league leaders Union Saint-Gilloise. Alfred Schreuder’s men will hope to bounce back from their recent loss as they take on a struggling Seraing side; keep an eye out for Bas Dost.

The final word on Seraing vs Club Brugge 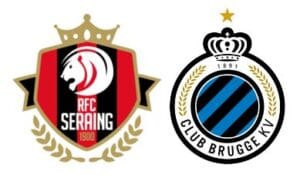