Bastia take on a St Etienne team still winless after five league outings this season. Stade Geoffroy-Guichard will be the destination for this game.

St Etienne came close to picking up the first victory of the season but they had to settle for a 2-2 draw with Valenciennes after a late equaliser. Bastia are now winless in two consecutive games after losing the battle with Rodez 2-0 at home.

St Etienne continued to be thwarted in their attempts to pick up a first league victory. The run has now stretched to five matches without success for the team, who have been increasingly poor at the back. Despite managing to find some scoring form through players like Krasso, the defence has been a let down for St Etienne. Bastia are low on confidence after losing back-to-back games and they have only picked up three wins in 23 away matches against St Etienne.

The defence of St Etienne has been unable to bring about any significant improvement over the last few weeks. The team has conceded over 1.5 goals in three consecutive games. Bastia have witnessed over 2.5 goals in three out of the last four Ligue 2 games.

Bastia were unable to find the back of the net in the recent game against the Rodez, but they have been quite good going forward. Bastia are up against a defence that has conceded a whopping 13 goals from the first five matches.

St Etienne continue to be engulfed by a world of problems after the team failed to hold on to a decisive lead against Valenciennes going into the last few seconds of the game. The goal conceded in the third minute of injury time is a huge blow to any of the small improvements made by the team over the last few weeks. The big consolation for St Etienne will be the form of players like Krasso. Gabriel Silva, Boubacar Fall, Aimen Moueffek, and Adil Aouchiche are injured while Etienne Green is suspended.

Bastia are struggling after back-to-back losses and it has put the team in a spot of bother going into the weekend. The potential for Bastia continuing their poor run is rather high considering that their record away at St Etienne is rather poor with just 3 wins in 23 games. Bastia do not have any injury worries.

Ligue 2 Stats, H2H, and Numbers for Saint-Etienne vs Bastia

FAQs on Saint-Etienne vs Bastia game 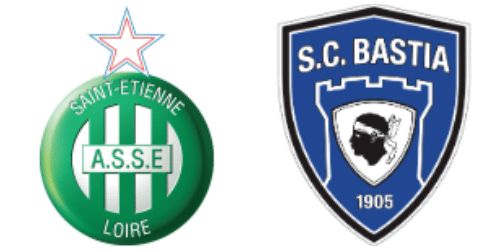 Where is the match going to take place? Stade Geoffroy-Guichard

Who is the favourite team to win the game? Saint-Etienne