Rotherham host Shrewsbury at the AESSEAL New York Stadium in League One on Saturday. League-leading Rotherham are targeting more points this weekend. Read our free predictions and find the latest odds for the fixture below in our detailed match preview.

Rotherham have lost only one of their last 15 home fixtures ahead of their latest test against Shrewsbury on Saturday. Read our top three predictions for this weekend’s fixture below.

Rotherham got back to winning ways against Lincoln (2-1) on Tuesday after a nervous three-game wobble and with some of the pressure alleviated the league leaders should be able to enjoy more success against Shrewsbury on Saturday. The Millers have lost just one of their last 15 league assignments at the AESSEAL New York Stadium and their strength at home should get them over the line again.

Shrewsbury enjoyed one of their most productive evenings of the campaign so far on Tuesday when they trounced Morecambe 5-0 and with their confidence levels topped up, they could breach Rotherham’s defences on Saturday. The Millers are averaging over 2.0 goals per game on their own patch this term however, so back the title chasers to bite back. Both teams notched in three of Rotherham’s last four home outings and we’re tipping that pattern to continue this weekend.

Rotherham have been strong starters this season and remarkably, they have been behind at half time just once in 38 League One fixtures in 2021/22. At home, they have been out in front at the interval in an impressive 12 out of 19 matches and their ability to strike early blows makes them an excellent choice in the half time result market against Shrewsbury.

Freddie Ladapo, Georgie Kelly and Will Grigg are all listed as injured for Rotherham, while Jamie Lindsay is considered doubtful having sat out Tuesday’s 2-1 win over Lincoln. The Millers lead the way in League One by four points, though they have played two games more than second-placed Wigan.

Shrewsbury have a relatively clean bill of health ahead of the weekend with midfielder David Davis the club’s only major injury worry. Shrewsbury’s 5-0 win over Morecambe on Tuesday was their biggest of the campaign so far, though they had won only once in 12 attempts before that.

Top Betting Odds and Stats for Rotherham vs Shrewsbury 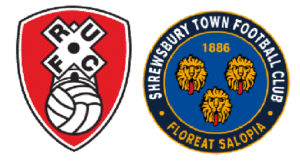 Rotherham and Shrewsbury drew 0-0 when the teams last met on March 1st.

Rotherham are the current League One leaders and title favourites, though Shrewsbury are expected to finish in the division’s lower half.