Both sides will go for victory in what is expected to be a tactical and interesting game to watch.

Rodez vs Bastia: Predictions and Bets

Check out the information supplied below, courtesy of our soccer experts, for valuable statistics about the game ahead. For more expert Ligue 2 picks, please visit our dedicated page.

There have been only 2 games so far between the two teams but both of them resulted in draws. Bastia has 2 draws in the last 5 games and Rodez has 1, the most recent game which was a 1:1 away draw against Toulouse. A few injuries in the away team will balance this game out – Tom Ducrocq and Maguette Diongue will both miss the game due to injuries.

In the two games, we had between the teams we saw no exchange of goals. Neither side managed to even score 1 goal. Why should this edition be any different? In 6 of the last 7 league games for Rodez, we had no exchange of goals.  Bastia took part in 5 such games out of the last 7. Traditions will be honored here too as we predict this will be a tactical duel between two even teams.

From the two games we saw so far, we had 0 goals in 180 minutes of football. Despite the 18th position in Ligue 2 Bastia has a somewhat good defense with 19 allowed goals in 18 games. For comparison, the currently ranked 3rd team in the league has 20 allowed goals. It is the attack of the team that is failing. All the more reasons for us to predict this one will be a goalless game. Rodez’s defense is also one of the best in the league with only 17 goals allowed in 18 games.

Dijon to get back on track

Both sides require points for the battle in Ligue 2 and we predict this is exactly what will happen. There will not be an exchange of goals in the game this Tuesday but there will be an exchange of points. Our football experts predict a 0:0 game that will be accepted as a good result from both camps. Even if that isn’t the case, we don’t expect more than 2.5 total goals scored on Tuesday, so the match will most likely fall into the under 2.5 goals category and there won’t be a BTTS outcome.

Head-to-head data for the Rodez vs Bastia game

Those are the key head-to-head statistics and odds for the Rodez vs Bastia game:


Q&A for the upcoming match: 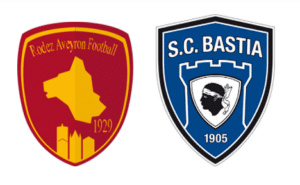